While he had been to the nation’s largest Newman Center before, this was his first visit since being named the spiritual leader of the Archdiocese of Chicago in 2014. A majority of the students at St. John’s are from Chicagoland and Cardinal Cupich had dinner with some of them before taking questions at “Coffee with the Cardinal.”

“Even in those days I could see the vibrancy and life that’s on the campus in this wonderful facility,” he said, standing in front of the altar as he spoke to the students and their guests.

“YOU ARE GOD’S BELOVED”

Rather than tell them what they should do to make Lent more fruitful, Cardinal Cupich invited them to see in Christ’s transfiguration an opportunity to look at their lives differently. The Lenten practices of prayer, fasting and almsgiving can help if taken the right way, he explained. 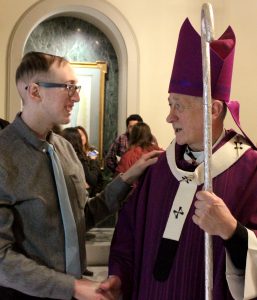 Cardinal Blase Cupich of Chicago greets sophomore James Ranuch after Mass at St. John’s Chapel in Champaign Sunday night. He also had dinner with Chicago-area students and answered questions for Catholic Illini during “Coffee with the Cardinal.” (The Catholic Post/Jennifer Willems)

The words God proclaims in the passage from St. Mark’s Gospel — “You are my beloved Son” — provide the key to prayer, according to Cardinal Cupich.

“What I invite you to do in these days of Lent is to have a prayer that is simply about that — being quiet and allowing the Lord to tell you that you are his beloved, that you count, that you matter,” he said. Then the question becomes, “Do I love the life that God has given me with all its frailties and all its vulnerabilities?”

“The only way we’re going to do that is to allow the Lord to tell us in our prayer how much we are loved,” he said.

Jesus provides the example for how to fast, Cardinal Cupich said, by not giving in to the temptation to turn stones into bread.

That is also a good starting place for almsgiving, Cardinal Cupich said, noting that it’s not just about the coins we take out of our pocketbooks to help the poor.

“Can we begin to see that our lives are the currency in the kingdom of God? That whenever someone is in need we don’t ask, ‘How much is it going to cost us?’ but rather, ‘What can I do to alleviate their suffering?’” he said.

The Lord is asking us to go to the peripheries where people are suffering and marginalized, Cardinal Cupich said. “That’s the almsgiving we are to give this Lent, so people don’t fall through the cracks.”

That sense of invitation and encouragement was also evident in the remarks Cardinal Cupich made as “Coffee with the Cardinal” began in the Newman Center’s Lewis Lounge. The room was filled with students, recent graduates and a few adults who were told, “Nothing is off base — you can ask me anything you want.”

One student told the cardinal that he had been exploring other Christian denominations as he struggled with faith, and asked for advice.

“I would applaud you,” Cardinal Cupich told him. “That’s an important question you’re considering. It would be very easy for people just to ignore the whole issue in the first place or why it’s even important to struggle with it. I would say God is working in your life and to pay attention to that.”

Then he talked about how the Catholic Church has remained anchored in four major points of reference or four marks of faith: one, holy, catholic and apostolic. For this reason, Catholic tradition provides not only a body of teaching that is important, but stability in a world where there’s so much flux and so many questions, he said.

“That’s what convinces me that this is the right thing. That’s something I would ask you to think about as you struggle with that,” Cardinal Cupich said, adding that God had planted the struggle in the young man’s heart.

“That’s the work of the Spirit. Don’t be afraid of it,” he said.

Cardinal Cupich commended a student who had struck up a friendship with a Muslim student and followed her dietary restrictions when dining together, saying these common meals often serve as a reminder of our common humanity.

“But allow a dialogue where she gets to know your tradition as well,” he told the Catholic student. That way respect grows on both sides and they will be able to see how God is working in both their lives.

He also addressed faith in the midst of illness, a question about mysticism in the Catholic Church, and the place of women in the church.

“I really believe in the nobility and generosity of your generation. I’ve seen it time and time again,” Cardinal Cupich said, noting their passion to address gun violence and immigration reform. What they must guard against is fear, which he called a corrosive emotion.

“My hope would be that you would not let fear grip your hearts. More often than anything, Jesus in the Gospels tells his disciples, ‘Don’t be afraid,’” he said. “The antidote to fear is not false courage, but curiosity about others. Jesus had that curiosity about people.”