DANVILLE — The girls high school basketball team from Schlarman Academy here prays before every game. Well, more than that.

In the locker room at Redbird Arena in Normal on Feb. 24 prior to the biggest basketball game in the school’s history — the IHSA Class 1A state championship match — the Hilltoppers and school chaplain Father Bowan Schmitt “changed it up a little bit,” said Peoples.

They not only prayed, they sang. 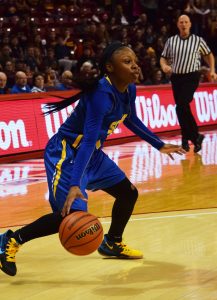 Janiah Newell of Schlarman looks to make a play in the state title game against Stockton. The junior led the Hilltoppers with 17 points. (Provided photo’/Schlarman Academy yearbook staff)

“We sang ‘This Little Light of Mine,’” said Peoples, one of the many talented players on Schlarman and whose father, Keith, is the team’s head coach. “It was a moment you can’t describe, having everyone in the locker room singing. And then Father Bo giving us a little speech telling us to play for God, play for each other, play for the community. That definitely got us focused.”

And did these focused Hilltoppers ever play, and shine, bringing home the school’s first-ever basketball state title with a 53-31 win over Stockton as a throng of fans from the Danville area roared its approval.

“It was an amazing experience,” said Gail Lewis, Schlarman principal, who told The Catholic Post she is a “huge basketball fan.”

“It was so special to sit by the court, being that close to watch the girls, and to look up and see how many people were there representing Schlarman,” said Lewis. “And they didn’t all come from Schlarman. Some were community members that just wanted to show their support.”

The support for this impressive team — which ended its season with a record of 33-1, with the only loss avenged with a thrilling win over Annawan in the supersectionals — extended well beyond Normal, Danville, and even the U.S.

Lewis explained that Saturday’s championship game was live-streamed to alumni on the school’s Facebook page. One of the alumni asked others watching to share their viewing locations.

“We had alumni watching from England, Italy, Canada, and at least 25 different U.S. states,” said Lewis. 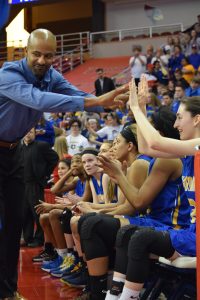 Coach Peoples, Lewis, and team members had a chance to thank the community for its support at an assembly that followed a parade through town on Saturday night.

“Seeing everyone clapping, cheering for you, it really means a lot,” said junior Janiah Newell, whose 17 points paced the Hilltoppers in the title game. Sophomore Capria Brown added 15 points and Peoples, who has already committed to play basketball at the University of Notre Dame, had 11 points and eight rebounds.

Hard work, preparation, athleticism, and a stifling defense are the calling cards for the Hilltoppers, which defeated Lebanon 51-40 on Friday to reach the title game. Because of a gift from the Schlarman Academy Foundation, all students in grades 4 through 12 were able to take buses to that game with tickets provided free of charge.

Asked to describe the intangibles that make this team champions, Anaya Peoples said “our love for the game and our heart.”

“We work so hard in practice,” she said. “We do the little things — diving on the court for loose balls, talking on defense, communicating with each other on the court.”

Newell spoke of the team’s “focus,” which increased each step along the way this season.

Principal Lewis agreed with those descriptions but went further.

“I’ve been a big advocate to make sure the girls are remembered for more than just their basketball playing,” she said. “They are determined in their school work. They work really hard. They are the first girls you see in the hallway that greet you in the morning. They’re so humble. I don’t hear them bragging about the basketball games.” 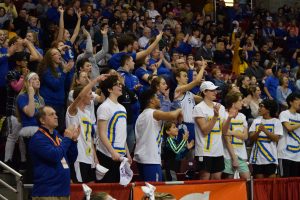 In fact, when asked for what memories they will cherish most from the weekend, Peoples and Newell both mentioned a made basket near the championship game’s end by Suzet Sermersheim, long after the game’s outcome had been decided. It was the freshman’s ninth and 10th points of the season, and the team’s joy for her erupted from the bench.

“That’s like a one shining moment,” Coach Peoples told reporters after the game.

“It was icing on the cake,” said Anaya Peoples. “I was so happy for her. She’s at every practice, running every baseline. She definitely earned that shot.”

And with it, another Schlarman light shone on the biggest high school stage in the state.

“Sometimes Danville is thought of as a little dot on the map that sometimes is forgotten,” said Lewis. “We sometimes get negative publicity, but for the town and for this school (the state title) just means a lot.”