CANTON — Celebrating Mass in their church for the first time in 13 months gave members of St. Mary Parish here an additional reason to rejoice on Dec. 17, known as Gaudete (Rejoice) Sunday.

“We’re not finished by any long shot,” said Father Daniel Ebker, pastor, of the long restoration process required after the church sustained damage in a natural gas explosion that rocked downtown Canton on Nov. 16, 2016. 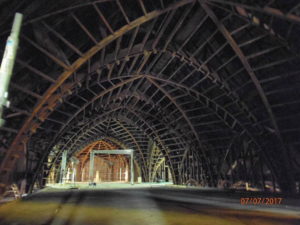 The scope of the restoration at St. Mary Church is evident in this photo taken after workers stripped the walls and ceiling down to the wood beams earlier this year. (Provided photo)

“But it shouldn’t be too hard to rejoice today, not for us here at St. Mary’s,” added Father Ebker in his homily. While the nearness of Christmas is the primary cause for joy on the Third Sunday of Advent, Father Ebker encouraged his parishioners to also “be happy and joyful that we’re here in church today.”

Those who filled every pew or stood in the vestibule didn’t need the encouragement.

“It’s just gorgeous,” said Carolyn Pogeman after the Mass as she looked around the 114-year-old church made nearly new again in the project. Over the course of the restoration, the church’s interior walls and arched ceiling were stripped to a wood beam skeleton after the shock of the explosion had cracked and loosened plaster.

“I could cry. In fact, I did,” said Pogeman, a member of St. Mary for 43 years, in expressing the joy of being back in the church after worshiping in the neighboring parish center since Nov. 20, 2016.

“It’s an amazing feeling,” acknowledged Deacon Sam Taylor, who proclaimed the Gospel at the Mass. “It’s been a long time.”

Before Mass began, Father Ebker addressed the assembly from the sanctuary, retelling the story “most of us know” of the night of the explosion and the subsequent repair of the church. The blast came as workers attempted to repair a ruptured gas line behind the city’s historic Opera House, a little more than a block away from the church. One worker was killed and the explosion damaged nearly 50 other structures. 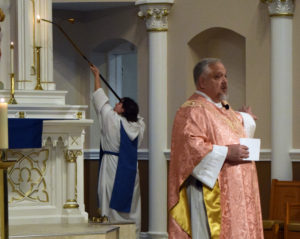 “When I came here the night of the gas explosion,” recalled Father Ebker, “I thought ‘There are some cracks but it’s OK. We’ll get it fixed. It’s not that big of a deal.’”

It turned out to be a very big deal, said the pastor, as it was determined large slabs of plaster had been jarred loose. Further, lead-based paint had been used in the past.

After considering various proposals, the diocese’s insurance company — Catholic Mutual Group — determined the best course was “to tear it all out and replace it,” said Father Ebker. The cost of the project would surpass $1 million, with repairs covered by insurance and the diocese. St. Mary Parish added nearly $200,000 to accomplish other renovations that were under consideration before the blast.

“Practically the only things that are not new are the bricks, wood beams, and the windows,” said Father Ebker. He added the church roof is almost new, having been replaced just before he arrived nine years ago, and the pews “are not that old.”

The long list of new items include the sound system, electrical wiring, carpeting, tile flooring in the sanctuary, and a paint color scheme that includes a light blue in the arched ceiling. A platform was built to raise the original high altar a couple of feet.

Among the work still to be completed is the installation of a new altar of sacrifice that has been ordered and will be consecrated when Bishop Daniel R. Jenky rededicates the church at a later date. In the interim, Father Ebker is offering the Mass at the original altar. 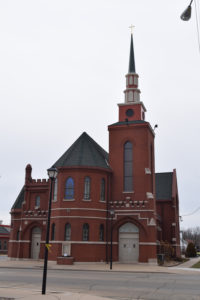 St. Mary Church in Canton was built in 1903. (The Catholic Post/Tom Dermody)

Father Ebker used his comments before Mass to educate on that temporary practice, saying “I’m not turning my back on you” when he faces the altar during the Eucharistic Prayer, and that the ritual calls on him to face the people during common prayers.

“Don’t get all upset,” he told the assembly. “We’re getting a new altar, and a new ambo.”

No one seemed upset after Mass, with many pausing to take photos of the new look.

Tom Krylowicz admired how the new paint scheme made the colors of the stained-glass windows more dynamic.

“They look even better now,” said Krylowicz. “Or maybe we were just away for so long.”

EDITOR’S NOTE: More photos from the Dec. 17 Mass have been posted to The Catholic Post’s site on Facebook.