NORMAL — History will record that The High School of Saint Thomas More in Champaign won the Illinois Class 2A volleyball championship on Saturday, Nov. 11, at Redbird Arena here.

And yes, on that afternoon the Sabers rallied to defeat Quincy Notre Dame in three sets — 18-25, 25-19, and 25-21 — to claim the trophy before a cheering throng of fans. (Editor’s note: Re-live the excitement through the music video above produced by The Catholic Post.) 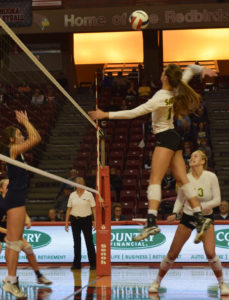 As Mica Allison watches, the Sabers’ Lucy Lux-Rulon soars for a spike in the state title match. (The Catholic Post/Tom Dermody)

But long before senior Brianna Hopper tipped the ball over the net for the final point and then fell to the floor with her teammates in a jubilant pile, this group of Sabers had forged a bond that is as unbreakable as the team was nearly unbeatable through a 39-3 season.

“The most special thing about this team is the relationships we formed,” said Hopper. “We are all the closest of friends and talk every day and will continue to.”

“I believe this team is so special not because of the individual talent each girl has, but the maturity and close relationship we all share,” she told The Catholic Post. “These girls became my family and that’s the reason why we meshed so well on the court.”

It isn’t just a sports family, though this group of Sabers is exceptionally gifted athletically. Four of the players are at least 6-feet tall, and two have signed to play Division I volleyball in college — senior setter and hitter Mica Allison, a high school all-American who will leave in January for Auburn University, and sophomore middle blocker Allie Trame, who last month committed to the University of Alabama.

The Lady Sabers are a spiritual family as well. And that, according to school chaplain Father Matthew Hoelscher, only helped strengthen their team bond.

“When you pray with others before the Lord, there’s a different level of intimacy that opens up,” said Father Hoelscher. “It becomes deeper than just wins and losses, because they are being vulnerable in opening up to each other, having deeper conversations. And when you trust each other off the court, you’re really going to trust each other on the court.” 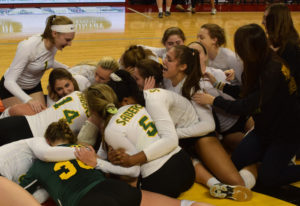 The Sabers pile onto the floor of Redbird Arena in jubilation after the final point of their state championship win over Quincy Notre Dame. (The Catholic Post/Tom Dermody)

“From a coach’s standpoint, now you have your players connected on multiple levels,” said Father Hoelscher. “And it showed through the whole season — their calm and their ability to enjoy the moment.”

The Sabers’ maturity showed when, in the championship game, they fell behind 21-9 in the first set. Rather than panic, they continued to smile and believe in one another.

“We’ve been put in that position before,” said Allison, whose leadership on and off the court was profiled in the Nov. 5 issue of The Catholic Post. “Throughout the season we had a lot of matches like that and it prepared us for that moment.”

In the team huddle after dropping the first set, “everyone knew we had these next two sets,” recalled Allison. “The team chemistry is definitely what led us to a state title.”

Allison’s talent and joyful enthusiasm are key parts of that chemistry mix. Her setting and hitting — she led the team with 12 kills and 12 assists — played major roles in the comeback. 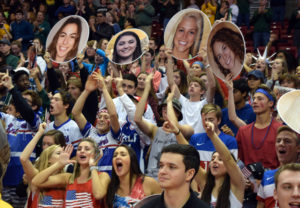 Members of the Sabers’ student cheering section like what they’re seeing in the state title game. (The Catholic Post/Tom Dermody)

“She’s not an All-American for nothing,” said Coach Bergman in post-game comments, crediting Allison’s dedication and work ethic. “We have a lot of ‘go-to’ players, but when we need to bring home something, she’s going to bring it home.”

Bergman spread the praise around, saying “everyone’s worked hard” and calling the championship “a culmination of everybody’s efforts away from the sport” that helped them to mature.

“You always hope to win a state championship,” said Bergman, in his third year as the Sabers’ head coach. “Maybe it wasn’t our goal, but this year it was one of our dreams to get here and win this. You set attainable goals, and you set your hopeful dreams, and that’s what we did this year.”

The team was to be honored at a school assembly on Wednesday that also included recognition for outstanding seasons by other girls fall sports teams at The High School of Saint Thomas More. The tennis, golf, and cross-country teams also reached state final competition.

Father Hoelscher also praised new athletic directors Josh and Krista Hinkley for facilitating the communication between Sports Leader, the coaches, and players. As a result, he said, the players better support one another and understand sports is a “great opportunity to bless and glorify God” rather than self.

“I am so thankful to be a part of this team where we can grow such a bond together with Christ,” said Lux-Rulon.

“When we won I was most happy to look around me and see my teammates, who became more like my family,” said senior Hayes Murray.

EDITOR’S NOTE: More photos from the championship game, as well as the tribute music video, have been posted to The Catholic Post’s site on Facebook. 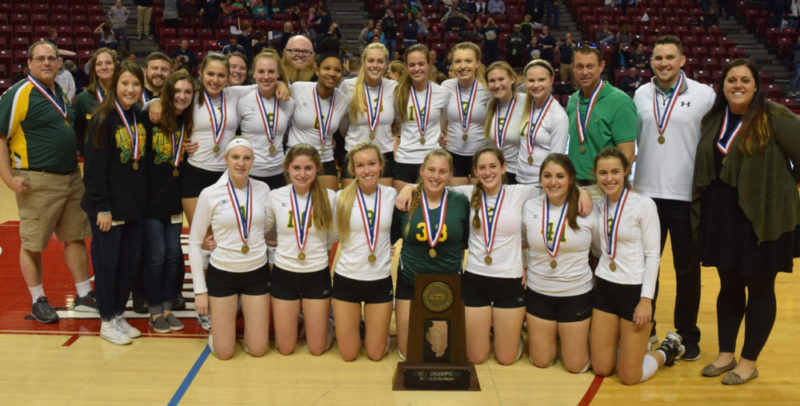