CHAMPAIGN — Mica Allison is a nationally recognized volleyball player, but the 6-foot senior at The High School of Saint Thomas More here is looked up to off the court as well.

Sincere, faith-filled, caring, positive, giving, fun, hard-working, humble, a good example — those are just some of the adjectives those who know Mica use to describe the White Heath resident and member of St. Philomena Parish in Monticello. 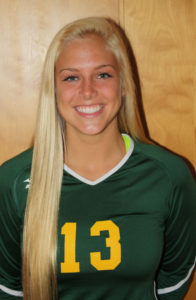 Mica Allison of The High School of Saint Thomas More in Champaign is recognized as one of the top high school volleyball setters as well as hitters in the nation. (Provided photo)

The “good example” description might be the one Mica appreciates most.

“When I was a freshman I had really good senior leaders and it was so cool,” Mica told The Catholic Post after a recent close home win against Olympia. “They were very good at the sport and also at life in general. I looked up to them a lot.

“I hope I have the same impact on the freshmen who are hopefully looking up to me, too,” she said.

One of the best setters and hitters in the country, she committed to play volleyball for Auburn University in her sophomore year. This summer, her Bloomington-based Illini Elite club team won the AAU Girls Junior National Championships in Orlando, Florida. Mica was named the tournament’s most valuable player.

In August, she was one of 12 players to make the final cut for the U.S. Under-18 national team, competing in world championships later that month in Argentina.

Closer to home, Mica and her talented teammates at The High School of Saint Thomas More compiled a 32-3 regular season record this fall. The Sabers were advancing in the state tournament as The Catholic Post went to press. defeating Downs Tri-Valley on Nov. 1 to win the Hoopeston Sectional and advance to the Class 2A Elite Eight. Their next match is Friday night against Aurora Christian in the Seneca Super-Sectional.

SUMMER OF SERVING ON, OFF COURT

In the midst of her busy summer, Mica spent a week with her parish youth group serving the needy in Colorado Springs at a Catholic HEART Workcamp.

“She literally got back to Bloomington (from the Orlando tournament), went to St. Philomena Church and got on the bus for the workcamp,” said Father Bruce Lopez, pastor, who accompanied the 29 youth and six chaperones to Colorado in early July. “She had no down time.”

“Right away, it was like I was meant to be there,” said Mica, who quickly bonded with the other teens and with them performed community service that included boxing up food for homeless families. 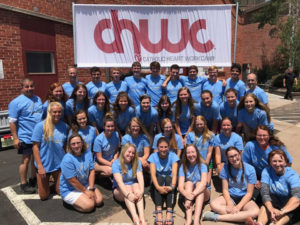 “I watched the freshmen watch her, and the example that she set for them,” said Father Lopez. He asked Mica to proclaim a Scripture reading during one of the workcamp’s Masses, and the star athlete — who keeps her cool through nerve-wracking matches — expressed concern she would mess up or even faint in front of the assembly of 300 at the liturgy.

“She proclaimed the reading with clarity and conviction,” said Father Lopez. “And she didn’t pass out.”

Mica told her pastor after the Catholic HEART Workcamp experience that “it was one of the best weeks of her life” as she grew in her faith and served the poor.

A daughter of Barry and Kim Allison, Mica began playing volleyball in sixth grade. Her mother was the coach. The next year, she started participating in club volleyball.

“She truly loves the game, and it shows,” said Kim Allison, who called her daughter “an amazing people person” who “has a way of walking into a room and igniting it.”

Mica’s joy radiates on the court and spreads to her teammates. It wasn’t always that way.

“When I was 15 on my club team, I experienced a lot of self-doubt and frustration,” she recalled. “It was miserable for me. I knew I had to change something if I wanted to have fun playing the sport.” 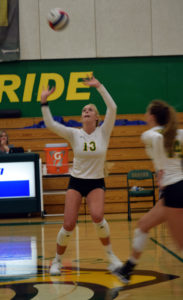 Now, “I try to stay positive for everyone I play with.” That’s easy, she said, because “every team I’ve been on I’ve loved every single person.”

And she is grateful to The High School of Saint Thomas More community for their love and support last fall when her older brother, Cale, died at age 21.

“When I came back to school I was very welcomed, a lot came to our house, came to his funeral,” said Allison. “It was really cool to know all those people were there for me and my family. It’s one of the biggest things I’ll take from Saint Thomas More — how everyone is so supportive and wants you to do well.”

“She’s a very caring person, a delightful young lady,” said Father Lopez. “She’ll be the first to tell you it’s not her success, it’s her teammates.”

“She sets the example for others to follow and holds the team accountable during practice,” according to Stan Bergman, head volleyball coach for the Sabers. “I believe her greatest strength is her hard work and giving everything in every play in practice and in a match for her team.”

Humble, yes, but also with lofty goals, including making the 2024 Olympic team. First, however, Mica and her Saber teammates are fully focused on more pressing matters.

“Hopefully we can make a state appearance,” she says. “It’s going to take a lot of hard work.”

EDITOR’S NOTE: Also winning their volleyball regional, in Class 3A, was Peoria Notre Dame. The Irish next play Monday evening in the Galesburg sectional.