MOLINE — Father Mark DeSutter’s first words after climbing to the top of the raised pulpit of Moline’s First Lutheran Church were “Boy, it’s a long way up here.”

The ad-libbed comment by the pastor of Sacred Heart Catholic Church was casual and drew laughter from the hundreds of Catholics and Lutherans in the assembly on Oct. 15, but it was also symbolically fitting for an evening when members of two rich faith traditions took an historic local step on the long path to unity. 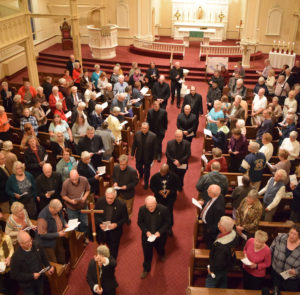 “On the Way” was the theme of an evening of dialogue, prayer, and fellowship that began with educational talks at St. Mary Catholic Church. Led by a sign that proclaimed Lutherans and Catholics “Together in Christ,” the assembly then walked four blocks down 5th Avenue to First Lutheran Church for a combined worship service followed by a light supper.

“Our hope is that our time together today will be a small sign to our community that we do wish to be one,” said Father DeSutter in a meditation during the worship service. “That is our deepest desire. It is a step toward the times when Lutherans and Catholics will be one in every way. We pray fervently for that day to arrive soon.”

Joining in that prayer were members and clergy from St. Mary, Sacred Heart, and Christ the King Catholic parishes in Moline, as well as Calvary, Salem, Trinity, and First Lutheran churches.

“THAT ALL MAY BE ONE”

The evening came as the world observes the 500th anniversary of the Protestant Reformation, a schism from the Roman Catholic Church initiated by Martin Luther in 1517. Father DeSutter called it “a painful event in the history of Christianity” and a time when “the unity of Christianity was bruised.”

But the Moline gathering was not about division, he emphasized, but the “true meaning of ecumenism” — the hard work required to “move toward the oneness that Jesus Christ wants,” work that has intensified since the Second Vatican Council. 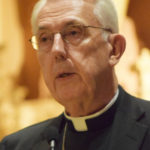 A leader in that movement for decades — the Rev. Dr. Lowell G. Almen, former secretary of the Evangelical Lutheran Church of America and co-chair of Lutheran/Catholic Dialogue for the United States — spoke at the opening educational event at St. Mary Church. He was joined by Father R. Michael Schaab, a senior priest of the Diocese of Peoria and former pastor of St. Pius X Parish in Rock Island.

Rev. Almen traced the history of Lutheran-Catholic dialogue, including the 1999 Joint Declaration on the Doctrine of Justification. He also distributed 32 statements of agreement between Lutherans and Catholics cited in “Declaration on the Way: Church, Ministry, and Eucharist,” a recent project of a joint working group of the U.S. Conference of Catholic Bishops and the Evangelical Lutheran Church in America.

Asked if eucharistic sharing between Catholics and Lutherans is “a realistic hope” and when it might happen, Rev. Almen said that’s the “clear hope” but the time is not here yet.

“It’s too early to set any date on that possibility,” he said, “but it’s not too early to pray that we will find ways in the future where that will be the proper experience for those who assemble in worship, Lutherans and Catholics together.” He repeatedly reminded his audience of Christ’s prayer “that we may all be one.”

CHANGE IS A CHALLENGE

Father Schaab, meanwhile, said that “attitude toward reform” is a key factor “whenever we get together in ecumenical dialogue, whether at the highest theological level or at our kitchen tables.”

Some people, he said, run from change and often oppose it as “revolutionary,” while others more quickly embrace it as “evolutionary” and part of organic growth. 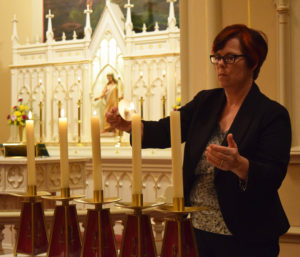 Pam Thompson, representing Christ the King Parish in Moline, lights a candle of commitment during the Catholic-Lutheran worship service. (The Catholic Post/Tom Dermody)

Noting that change is always a challenge, Father Schaab urged Catholics and Lutherans to study and pray over the 32 statements on agreement and justification distributed at the event , ask questions such as “Where is this taking us,” and seek more clarification and ecumenical action from their pastors.

Representatives of all churches had roles in the joint worship service at First Lutheran. Providing musical accompaniment was Stephen Steely, who is organist at both First Lutheran and St. Pius X Parish in Rock Island.

Near the end of the service, five candles were lit representing commitments of Lutherans and Catholics going forward, including to “seek visible unity, to elaborate together what this means in concrete steps, and to strive repeatedly toward this goal.”