Father, son in Lincoln among 163 in diocese baptized during Easter Vigil 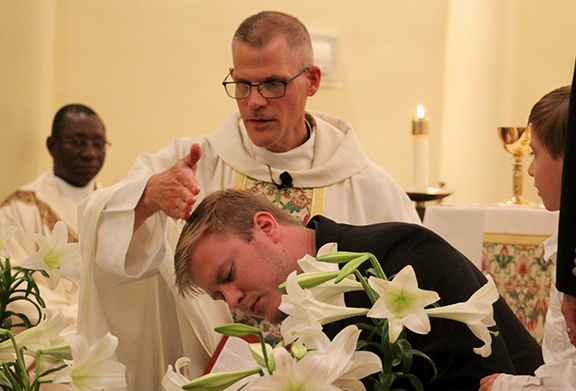 After years of searching for answers, Matt Bidwell's journey of faith brought him to the font at Holy Family Church in Lincoln, where he was baptized by Father Jeffrey Laible at the Easter Vigil on April 15. His son Roman, who was baptized next, looks on at right. (The Catholic Post/Jennifer Willems)

LINCOLN — Matthew Bidwell finds it difficult to talk about himself, but there was no need for words after his baptism during the Easter Vigil at Holy Family Church last Saturday night. The smile on his face said it all.

It soon communicated itself to his son Roman, who was the next to have holy water poured over his head, and found its way into the assembly as the animated 6-year-old assured Father Jeffrey Laible, pastor, that he had understood the prayers and what was happening. 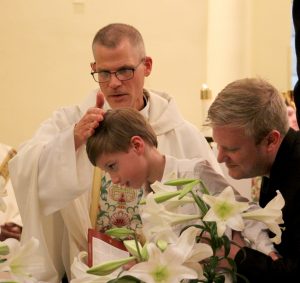 “I’ve been talking to him about baptism,” Bidwell later told The Catholic Post. “He goes to Carroll Catholic School, so they’ve been praying for him. . . . I’ve been trying to go to Mass with him as often as I can.”

The Bidwells were among 10 people at Holy Family and 163 people around the Diocese of Peoria who were baptized at the Easter Vigil on April 15. For pastoral reasons, Laura Fitzgibbon of Holy Family was baptized and received into the church the weekend before.

While the adults are confirmed and receive Communion for the first time on Holy Saturday, children like Roman usually continue their sacramental preparation with their classmates.

Parishes in central Illinois welcomed another 274 people who were already baptized and completed their Christian initiation by making a profession of faith, being confirmed and receiving Eucharist. In Lincoln, that included five more people from the Logan County Catholic Community parishes of Holy Family, St. Thomas Aquinas in Mount Pulaski, and St. Patrick in Elkhart.

When it came time to choose a confirmation name, Bidwell first looked to St. Michael, the patron saint of those in the military and law enforcement. As a former Marine, he thought the saint might be a good fit, but he also admired St. Paul’s zeal.

In the end, he chose St. Thomas Aquinas, the doctor of the church who wrote “Summa Theologica.” 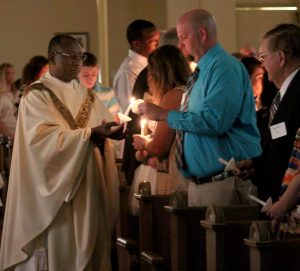 Father Simon Taabu shares the light of Christ with Chris Phillips, who was baptized during the Easter Vigil at Holy Family Church in Lincoln. In all, 16 people from the Logan County Catholic Community were received into the church on April 15. (The Catholic Post/Jennifer Willems)

Bidwell cited the story of how Thomas was kneeling in prayer before the cross when the Lord asked what he wanted. “Nothing but you, Lord,” the future saint replied.

“That really spoke to me,” Bidwell said. He has started to read his patron saint’s great theological masterpiece, but acknowledges, “It’s a little difficult.”

He has also persevered in prayer to stay focused as he prepared for the Easter sacraments.

“It’s been really busy and there are all these different things that constantly try to take priority,” said the man who is attending Heartland Community College in Bloomington in order to complete the courses he needs to apply for medical school. “It has all been about trying to find time for reflection. I’ve been spending a lot of time in adoration when I’ve had the opportunity.”

Knowing he was drawing closer to the answers he had been seeking throughout his life proved emotional at times, but he said he’s glad he found a spiritual home in the Catholic Church.

“I just looked forward to it so much,” Bidwell said. “It was everything I was hoping for — and more.”