Irene VanderVennet was out to dinner with her grandson, Charlie Shadid, and a group of friends. There were fresh flowers and nice china on the table set for 10, the food was varied and plentiful, and the servers were doting and friendly.

Just a matter of feet away, however — and well within Charlie and his grandmother’s sight — about 75 people sat on the floor eating only a small portion of rice and beans from plastic bowls. 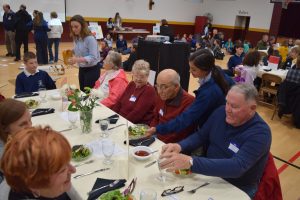 St. Philomena students Jenna Day (left) and Irene Ehrhart serve those sitting at a table representing the developed nations of the world during the first Hunger Feast at St. Philomena School on April 5. (The Catholic Post/Tom Dermody)

Such was the eye-opening reflection of life in developed versus underdeveloped nations recreated in the St. Philomena School Gym in Peoria on April 5 during a “Hunger Feast” coordinated by the school’s seventh grade classes. The 150 people attending the event had no idea to which group they would be assigned — a third option, developing nations, received a sack lunch with a sandwich — when they arrived.

“I feel a little guilty sitting here and eating this wonderful meal while the rest of you are eating rice and beans,” said VanderVennet during a period of invited reaction near the end of the 90-minute event. “It just makes you feel like you want to share.”

Inspiring sharing to help alleviate local and world hunger was a goal of the Hunger Feast, the culmination of months of planning by the seventh-graders under the direction of their teachers, Leah Mangieri (literacy) and Sally Kincaid (math). It was modeled after a Hunger Feast that Mangieri had attended while in college.

Every class member had a role in the planning and conducting of the event at St. Philomena. Some were servers or on the clean-up crew. Some recruited business sponsors for the food or were involved in promotion. Others researched and reported  on local and global agencies addressing hunger, such as Sophia’s Kitchen or Catholic Relief Services. Several students photographed the evening for an all-school presentation in the coming days.

Charlie Shadid was one of the emcees for the evening, speaking beneath a large, projected image of Mother Teresa with her quote: “If you can’t feed a hundred people, then feed just one.”

“I hope we gave you something to think about tonight and that you may go out and volunteer with an organization such as these to help people in need not just in Peoria but all around the world,” he said before the evening was closed with a prayer. 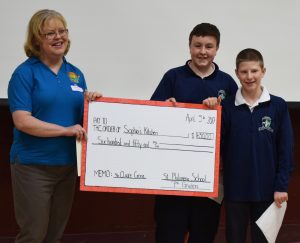 The seventh- and eighth-graders at St. Philomena — like students at several other Catholic schools in the Peoria area — are already active volunteers. On Tuesdays, class representatives help with food preparation and distribution at Sophia’s Kitchen, which serves more than 300 people in need daily at St. Joseph’s Hall, 103 Richard Pryor Place just south of downtown Peoria.

The director of Sophia’s Kitchen, Claire Crone, was present for the Hunger Feast and spoke to the students, family members, and friends in attendance.

“Who are the poor of Peoria?” she asked the group. While most might assume the poorest population is made up of drug addicts or alcoholics, Crone said those Sophia’s Kitchen serves every day “are just like your family.”

“There’s Grandma trying to hold everything together,” she said. “The single mom who is working three jobs trying to provide for her family. The guy who just can’t get a job.” Some, she said, have mental illness or severe health issues. And most don’t have connections to help improve their situation. 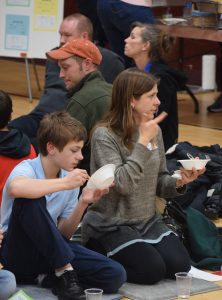 Liam Edley and his mother, Diane, eat their dinner of rice and beans as part of the group representing underdeveloped nations of the world during the Hunger Feast at St. Philomena School in Peoria on April 5. (The Catholic Post/Tom Dermody)

“We can’t fix all of their problems,” said Crone. “But we can see that no one is hungry.” She explained how Sophia’s Kitchen evolved from one simple act of kindness by a priest when visited by a hungry man, and now embraces more than 200 volunteers.

“We see miracles there all the time,” she said, as resources appear just as they are needed.

The St. Philomena students surprised her with more resources for Sophia’s Kitchen — a check for $650 representing proceeds from the Hunger Feast.

The benefits of the evening will likely go beyond financial, as the students learned how to plan a major event and all came away with renewed appreciation for, and the responsibility that comes with, the blessings we enjoy.

“The seventh-graders did a great job,” said Reneta Moehn, a school parent. “It definitely made me more aware. I will try to help and volunteer where I can for people in need.”

EDITOR’S NOTE: More photos from the Hunger Feast have been posted to The Catholic Post’s site on Facebook.