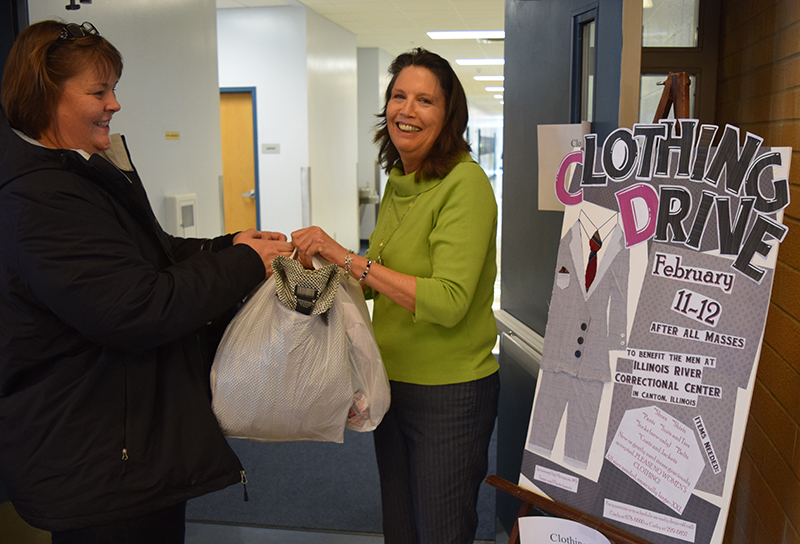 Chrissy Ropp hands a bag of men's clothing to Sue D'Amore before the 9:30 a.m. Mass at Blessed Sacrament Church in Morton on Feb. 12. The parish collected clothing Feb. 11-12 for use by outgoing parolees and releases from the Illinois River Correctional Center in Canton. (The Catholic Post/Tom Dermody)

MORTON — The prison gate opens and you re-enter society after a lengthy incarceration. The adjustment is going to be difficult enough with no money, perhaps no home, and no transportation.

But because of the generosity of members of Blessed Sacrament Parish in Morton, men released from the Illinois River Correctional Center in Canton can take those first steps with the dignity of wearing appropriate clothing. 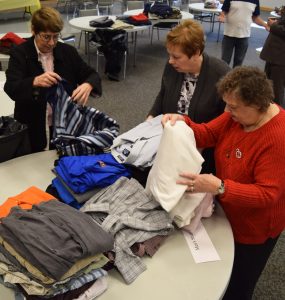 A clothing drive conducted at all weekend Masses Feb. 11-12 filled a 15-foot U-Haul truck with new and gently used pants, shirts, shoes, sweaters, suits and sports jackets for use by those being released from the Canton facility — a medium security correctional center with a population of more than 2,000.

The project was an outreach of those who took part in the ninth Metanoia — a 24-hour spiritual renewal program developed at Blessed Sacrament that includes an overnight stay at the parish center.

“After the Metanoia overnight, the team and participants gather to identify an outreach project that puts their faith into action,” explained Cathy Konsky, director of adult faith formation at the parish. Past outreaches have included planting a garden and donating vegetables, assisting at a local foodbank, or helping with the parish’s Christmas food drive.

Metanoia is a Greek word meaning “change of heart,” and how the team and participants of Metanoia 9 in November chose the prison clothing project as their outreach project was a “God-incident,” said Konsky.

Two participants, Sheila Kaurin and Deacon Joe LaHood, are active in Prison Cursillo ministry. Kaurin had told Deacon LaHood, who serves at Holy Family Parish in Peoria, about Metanoia and he decided to take part in the November program as a guest.

In addition, Father Kyle Lucas — parochial vicar and spiritual director of Metanoia 9 — has assisted at Logan and Lincoln Correctional Centers, while Deacon Dave Steeples has served on prison teams and as rector of a Prison Cursillo.

Moments before a follow-up meeting to determine the outreach project for Metanoia 9, Kaurin and Deacon LaHood received an email from Justin Hammers, warden to Illinois River Correctional Center, about a proposed clothing donation program. The email, sent to those who volunteer at Illinois River, said such donations would not only conserve funds in a time of state budget impasse, but provide “an opportunity to help a man make a fresh start, transitioning towards becoming a contributing member of society.”

“I’m a guest here, I can’t recommend it,” said Deacon LaHood to Kaurin at the time. But another Matanoia 9 participant overheard their discussion, shared it with the full group, and the project was adopted “in a matter of a few minutes,” said Deacon LaHood.

Members of Metanoia 9 publicized the project and the need for it weeks before the drive. The response Feb. 11-12 was beyond expectations.

“The entire parish participated, and everyone was enthusiastic and joyful as they were doing the work,” said Konsky. All who contributed clothing received a holy card of St. Maximilian Kolbe, patron saint of prisoners, and were encouraged to pray for those who would receive the clothing.

The parish has since received a thank-you note from Warden Hammers.

“I cannot begin to thank you enough for the positive impact your congregation has had on the inmates of Illinois River,” wrote Hammers in a message to be published in the Blessed Sacrament parish bulletin. “As they walk out the doors to start their new life, they walk a little taller with their heads held higher in the clothes donated by your congregation.”