CANTON — The deadly natural gas explosion that rocked the downtown square of this Fulton County community on Nov. 16 has also temporarily knocked the faith community of St. Mary Parish out of their damaged church, located just a block east of the blast site.

“The good thing is we have somewhere to be,” said Father Daniel Ebker, pastor, as he celebrated Sunday Mass four days later in the St. Mary’s Parish Center, built next to the church 15 years ago. 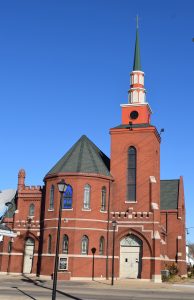 St. Mary Church in Canton, located a block away from the blast site, is closed indefinitely because of cracks in its ceiling plaster. A steeple was added to the 116-year-old church at 159 E. Chestnut St. in early September. (The Catholic Post/Tom Dermody)

On the evening of the explosion, Father Ebker opened the center as a rest area for first responders, city crews and utility workers and stayed there throughout the night. The blast, which killed one utility worker — Arturo Silva Jr. of Mapleton — and injured 11, occurred just before 6 p.m. as an Ameren Illinois team attempted repairs after a third-party contractor had ruptured a gas line behind the city’s historic Opera House.

The explosion rendered three buildings a total loss and damaged nearly 50 other structures, among them the nearby 111-year-old St. Mary Church.

Inspectors subsequently found no structural damage to the church. Because of protective panels installed in recent years, all of the church’s stained-glass windows remained intact — unlike the majority of storefront windows on the city square which were blown out by the blast. But ceiling plaster had cracked, resulting in quarter-sized pieces or smaller falling throughout the church.

“There are some four-sided cracks, pieces like this big,” reported Father Ebker, spreading his arms wide. “They are afraid those pieces can come loose and fall down.”

Notices were placed on church doors that, until repairs are made, Saturday afternoon Masses are canceled and Sunday morning Masses will take place in the hall of the parish center. For the 150 parishioners who filled the hall for the 8 a.m. Mass three days after the explosion, there was plenty to be grateful for as the Thanksgiving holiday approached.

“I’m thankful the church was basically spared,” said Kathy Dye, parish organist, who used the electronic keyboard on which she teaches piano lessons to lead the music in the parish hall. “It’s wonderful we can come together and praise the Lord in this way.”

The Mass intentions included a prayer “for the people of Canton, and all affected by the recent explosion, that they may be consoled in their suffering by our loving Lord and his people.” Another asked protection for “local law enforcement and all who serve in harm’s way.”

“We passed out water, had coffee and snacks for them, offered the use of our bathrooms, whatever,” said DeFrain. 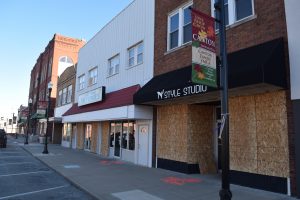 The Nov. 16 natural gas explosion blew out windows in dozens of buildings around the downtown square in Canton. (The Catholic Post/Tom Dermody)

Her husband, Kevin, is manager of the J.C. Penney store located just north of the blast site. The couple was celebrating their wedding anniversary with a dinner in Peoria when their daughter, Gillian, called from downtown Canton.

“She was right in the square,” said Laura DeFrain, recalling the panic in the voice of her daughter, who was unharmed. The phone then continued to ring as J.C. Penney employees called in. No employees were hurt, but the store is expected to remain closed through Thanksgiving.

“We’re grateful there weren’t more fatalities,” she added. “There were still a lot of people in the area businesses.”

In his Sunday Mass homily, Father Ebker said some may ask “How could God let Canton suffer like it did?” Asking why God allows pain, suffering and death are “legitimate, important questions.”

“The reason we are here is we do have the answer,” continued Father Ebker, noting the church was celebrating the feast of Christ the King. He pointed to the day’s second reading, in which St. Paul tells the Colossians that God “delivered us from the power of darkness and transferred us to the kingdom of his beloved Son, in whom we have redemption, the forgiveness of sins.”

“Christ is the King of the Universe who suffered and died on the cross because he loves you, because he wanted to fix the problems we create,” said Father Ebker. Meanwhile, the pastor expressed the hope the faith community might be back in their church by Christmas.

“But who knows how long it’s going to take or what we’re going to have to do,” he said.

EDITOR’S NOTE: More photos have been posted to The Catholic Post’s site on Facebook.