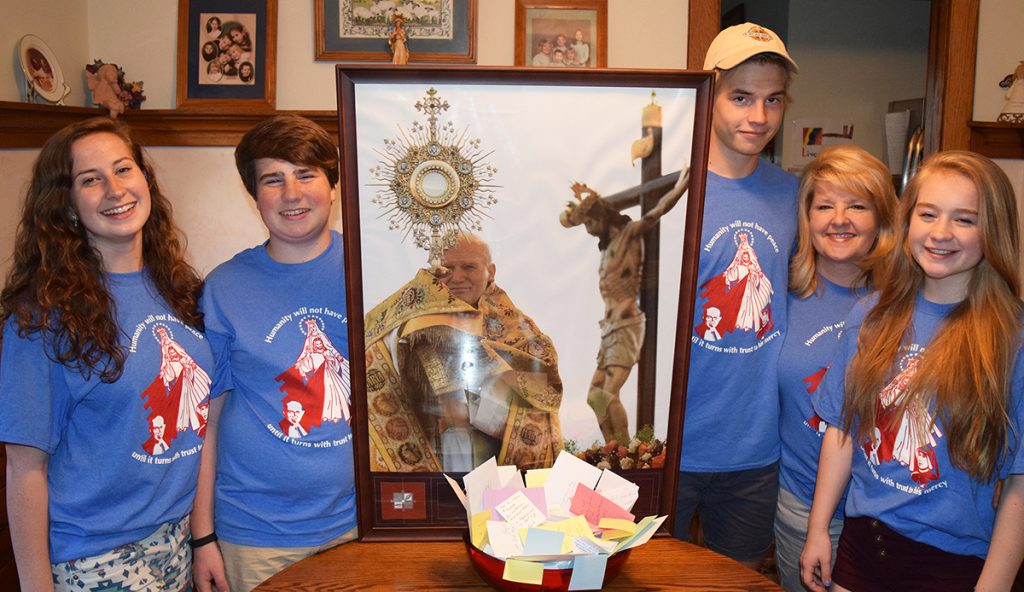 So says D’Arcy Conley in explaining how she and her four children — members of St. Mark Parish in Peoria — have been working since February to raise money to travel to Poland this month for World Youth Day with Pope Francis.

With the cost of joining the three-week pilgrimage organized by the Servants of the Pierced Hearts of Jesus and Mary (see related story) at just under $4,000, for all the Conleys to go was equivalent to buying a car.

“But this is better than a car,” said daughter Maddie, 21, a senior at Bradley University in Peoria.

“I have such a desire to see the Holy Father,” said Maddie, who recalled her response when her mother floated the idea to family members via email late last year.

“Within five seconds I emailed my Mom back in all caps and said ‘YES, I’M IN. I’LL DO IT!’” said Maddie, who then began recruiting others at the St. Joseph Catholic Newman Center at Bradley University to join them.

“Knowing my whole family has the opportunity to be in Poland with 2 million other Catholics who are there for Christ and to grow in their own faith is something I’m really excited to experience and feel that love,” said Maddie.

But how to afford it?

It turns out the fundraising recipe for the Conleys, like many other pilgrims, involved bake sales. But few can rival this family’s commitment. 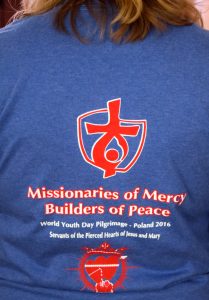 With 2 million expected for World Youth Day in Krakow, the 100 pilgrims traveling with the Servants of the Pierced Hearts of Jesus and Mary will wear matching t-shirts to help stay together. (The Catholic Post/Tom Dermody)

The selling is only part of the time commitment. The baking also took up several nights a week, and pricing and tagging was done Saturday mornings.

Son Jack, 18, a 2016 Peoria Notre Dame graduate who has enrolled at Bradley for the fall, brought in reinforcements.

“Jack enlisted several of his friends to come over several times,” said D’Arcy, showing photos of Peoria Notre Dame senior boys in her kitchen baking apple pies, which turned out to be their specialty.

“We made a lot of bread, too” added daughter Grace, 16, a Peoria Notre Dame junior this fall who told The Catholic Post she is especially looking forward to the overnight vigil with Pope Francis at Campus Misericordiae, near Poland’s Wieliczka salt mine.

When selling their goods, including at the annual St. Mark’s spaghetti supper, the Conleys accepted more than money. They also collected prayer intentions — a whole bag of them they will carry to the many holy sites in Poland.

The Conleys took their spiritual preparations for the pilgrimage just as seriously as the fundraising, utilizing Divine Mercy videos and books by Father Michael Gaitley, MIC, including his “33 Days to Morning Glory” consecration to the Blessed Virgin Mary. When the busy family is together, they try to get in a family rosary or a Divine Mercy Chaplet. This year that has often been on the way to a parish bake sale.

“I personally have been trying to go to confession every week,” added Maddie.

“Sister Sara (Kowal) has really been encouraging and supportive to help us to prepare and be open to the graces that can be received if you are prepared spiritually and emotionally for this type of pilgrimage,” said Mrs. Conley.

When asked her hopes for the pilgrimage, Mrs. Conley looked at her children.

“Hopefully they will be touched by the Holy Spirit in such a way that it makes an impact on my kids’ lives,” she said. “And regardless of what happens to them as they go forward in life, this will always be with them to bring them back to what’s important, the importance of their Catholic faith. It’s a gift, and you have to take care of that gift to meet life’s challenges, persevere, and have hope.”

“They need this,” she added, predicting that because of cultural changes “being a Catholic is going to get harder instead of easier.”

Her children are aware of, and grateful for, their mother’s concerns and sacrifices.

“We would not be going if it were not for my Mom,” said Maddie. “She has put in more time and effort into this than just about anyone else. We are incredibly blessed to have a mother who cares enough to send all of us over to Poland, make sure we get there in one piece and have everything we need. She cares deeply about our faith, and not everyone is blessed with that.”

The Conley clan has diverse hopes for different aspects of the pilgrimage. Jack, who took German all four years at Peoria Notre Dame, is anticipating the moving experience of visiting the Holocaust museum at Auschwitz, the Nazi death camp during World War II.  Drew thinks to be at Mass with Pope Francis will be “pretty cool.”

And all are happy the baking is about to end.

“To be able to be in the presence of a successor to John Paul II, Pope Francis, with my family is a gift beyond words,” said Mrs. Conley. “I just hope my kids and I are worthy.”