Dozens of pilgrims from the Diocese of Peoria will join an expected 2 million Catholics preparing to gather in Poland with Pope Francis at World Youth Day 2016 later this month.

Most of the local participants will be part of a pilgrimage organized by the Servants of the Pierced Hearts of Jesus and Mary that leaves July 15 and returns Aug. 4. That trip has drawn 100 youth and chaperones, with half of them from parishes and institutions in central Illinois — including contingents from Peoria Notre Dame High School as well as Newman Centers at Illinois State University in Normal and Bradley University in Peoria. 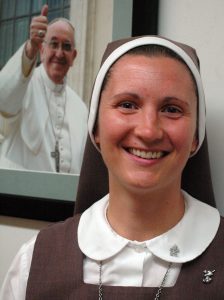 “We pray and hope this time is a time for the youth to experience the universal church, the Holy Father’s presence, and the presence of our Lord in the church,” said Sister Sara Kowal, SCTJM.

“We pray and hope this time is a time for the youth to experience the universal church, the Holy Father’s presence, and the presence of our Lord in the church,” said Sister Sara Kowal, SCTJM, a theology teacher and campus minister at Peoria Notre Dame.

World Youth Day will take place in and around Krakow July 26-31, with Pope Francis leading events July 27-31, including a closing overnight vigil and Mass. The worldwide gatherings with the pope are focused on persons ages 16 to 35 and typically take place every three years in a different country.

— Related story: Peoria family of 5 will go thanks to bake sales, blessings —

Before arriving in Krakow, those on the pilgrimage directed by the Pierced Hearts community will first spend nine days touring Poland and its holy sites. The tour will focus on the saints of Poland, including St. John Paul II, who instituted World Youth Day in the mid-1980s.

“For us, Poland and Krakow are very important,” said Sister Sara, noting members of her community regularly take pilgrimages there and that Mother Adela Galindo, foundress, is accompanying this tour.

“John Paul II is our spiritual father,” added Sister Sara.  The pilgrims will visit his birthplace in Wadowice.

Because this World Youth Day takes place during the Year of Mercy, the local pilgrims have spent months studying about Poland’s saints known for their witness to mercy, including St. Faustina Kowalska — whose visions of Jesus inspired Divine Mercy devotions — and St. Maximilian Kolbe, who volunteered to die in place of a stranger in the Nazi death camp of Auschwitz during World War II.

Auschwitz will be part of the group’s Poland tour, as will seven other cities including two major sites of Marian devotion — Czestochowa, home of the Jasna Gora monastery which houses the famous icon of Mary known as the Black Madonna, and Niepokolanow, known as the “City of the Immaculate.”

All will be in preparation for the major encounter in Krakow.

Kelly O’Ryan, who graduated from Illinois State University in Normal in May with a degree in elementary education, has been looking forward to World Youth Day for three years.

“When it was announced in Rio de Janiero (site of the last WYD in 2013) that the next one would be in Poland, I immediately wanted to go,” said O’Ryan, who will begin service as a campus minister at the St. John Paul II Catholic Newman Center in Normal when she returns from the trip.

That desire was sealed when the Elmhurst resident learned late last year of the pilgrimage being organized by the Servants of the Pierced Hearts.

“As soon as they started gathering names, I was dead-set I would be going on the trip,” she told The Catholic Post.

Most pilgrims will carry prayer intentions to Poland they’ve gathered from family and friends. O’Ryan will carry hundreds more in her heart.

“The prayer intention closest to my heart is for all of the students coming in and all of the students who are coming back at the Newman Center — that I could bring them along in my heart and present them to the Lord,” said O’Ryan. “I know the Newman Center has changed my life, and I hope it can continue to do that in the hearts that are still coming.”

She and Sister Sara agreed that the major goal of World Youth Day, like any pilgrimage, is “transformation.”

“I think that’s a really good summary of my hopes for this trip,” she said. “I don’t know exactly what the Lord is going to do, but I hope he can take what I am and transform it into Him, which is mercy.”

Sister Sara and other leaders are emphasizing that participants maintain “a spirit of offering” as they endure the rigors of pilgrimage, which will include a nine-mile walk from Krakow to a field near the Wieliczka salt mine for an overnight vigil and Mass with Pope Francis.

“It can be uncomfortable, and whether it’s heat, or fatigue, or blisters, or crowds, or waiting, we always have to have a spirit of offering in our hearts,” said Sister Sara, so we don’t regress into complaining, and we don’t let that sacrifice go to waste. The church needs those sacrifices.”

Following World Youth Day, the pilgrims with the Pierced Hearts tour will spend a few days in Prague, the largest city in the Czech Republic before returning home.

Knowing that many family and friends at home will want to follow the pilgrims, Sister Sara said a Facebook page for the trip has been at https://www.facebook.com/piercedhearts.org.