MOLINE — In a summer already tainted by terrorism and escalating racial tensions, and in the days before the opening of the Republican and Democratic national conventions, nearly 200 Catholics of the Quad Cities region gathered Sunday to pray for healing and peace in our nation.

The afternoon service at Sacred Heart Church here was scheduled as a parish Year of Mercy event before the mass shootings in Orlando and the more recent eruption of violence and protests involving relations between law enforcement and the black community. 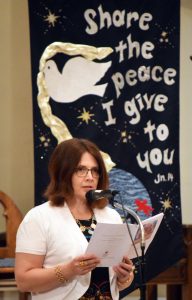 In front of a banner proclaiming a scriptural message of peace, Stephenie Adams reads a reflection assuring the Holy Spirit is with us. (The Catholic Post/Tom Dermody)

“Obviously the events of the last week in Louisiana, Minnesota, and Dallas seem to make this prayer service even more important,” said Father Mark DeSutter, pastor of Sacred Heart Parish, in welcoming participants to the July 10 Prayer Service for Peace and Healing in Our Country.

“We are, it seems, caught up in an unending cycle of violence,” he continued. “We pray today that cycle will be broken by the love of God and a renewed love of neighbor.  We pray for a sense of solidarity. We realize that what hurts one of us hurts all of us. We pray again for peace through justice.”

SENT FORTH TO BE PEACEMAKERS

To that end, three candles were lit as the assembly prayed for strength and blessing for peacemakers, comforters and healers. A series of readings were followed by quiet meditation and songs, including the “Prayer of St. Francis,” led by a choir directed by Susie Budde.

“We count on your presence with us, Jesus,” prayed Sister Kathleen Mullin, BVM, as the service began. “Your presence breathes gentleness, heals our brokenness, loves us into wholeness, embraces us with goodness and peace, so that our lives can be a song of thanks.”

Sister Kathleen is part of a nine-person committee planning Sacred Heart Parish’s response to the Year of Mercy proclaimed by Pope Francis.

After the service, she told The Catholic Post that a reading and a song inviting the Holy Spirit to “renew the face of the earth” seemed especially powerful given recent events. She expressed her hope that the time of prayer would lead to individual healing actions. 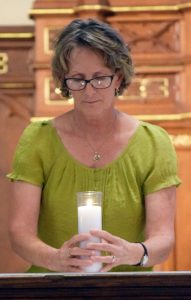 Amy Mack pauses with a candle during the Prayer Service for Peace and Healing in our Country. She led a prayer to strengthen and bless those who are comforters. (The Catholic Post/Tom Dermody)

Following the police-related shootings in the days before the service, organizers took a fresh look at the service they had planned.

“The only thing we changed were a couple of the prayers of intercession,” she said. One petition asked for “systems that provide for the protection of all people,” while another sought to “open our hearts to learn from those who are different from us.” Several of the intercessions were for the selection of leaders, including for those “who can lead each of us and this nation to virtue.”

The service ended with participants raising their hands in blessing over one another, and a reminder from Sister Kathleen that “we are sent forth to be peace in our world.”

As she looked at the crowd of people the service attracted on a Sunday afternoon, committee member Rosemary Schmitt saw nearly 200 reasons for hope after some difficult days.

“This is what I was dreaming of and hoping for” in planning the service, she said.

“It was very much needed,” agreed Sacred Heart parishioner Jean Edmunds, who brought three of her grandchildren to the event. “The timing is perfect.”

EDITOR’S NOTE: Additional photos from the prayer service have been posted to The Catholic Post’s Facebook page.