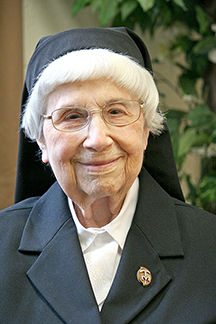 WEST PEORIA — Sister Mary Dolores Kirchgessner, OSF, died June 6, 2016, at Mother of Peace Home. She was 103 and was in her 72nd year of religious profession as a member of the Sisters of St. Francis of the Immaculate Conception.

Visitation is planned for Friday, June 10, from 3:30 to 7 p.m. at Immaculate Conception Convent, 2408 W. Heading Ave. A Mass of Christian Burial, celebrated by Father Martin Mwongyera, will follow.

The daughter of Albert and Anna (Waldschmidt) Kirchgessner, Mildred Christina Kirchgessner was born on Dec. 22, 1912. She was a native of Cazenovia and claimed St. Mary in Metamora as her home parish.

She entered the Sisters of St. Francis of the Immaculate Conception — also known as the Heading Avenue Franciscans — on Sept. 3, 1941, and professed vows on Aug. 15, 1944.

In addition, Sister Mary Dolores was a parish visitor at St. Philomena in Peoria from 1979 to 1989, and did bookkeeping at St. Joseph’s Home in Peoria, maintained medical records for her congregation, and managed the dietary needs of her Sisters at the motherhouse in West Peoria.

Sister Mary Dolores was preceded in death by two sisters and five brothers. She is survived by her sisters-in-law, Joan Kirchgessner, Patricia Kirchgessner and Edytha Kirchgessner; a brother-in-law, Dean Moushon; several nieces and nephews; and her Franciscan Sisters.

Memorials may be made to the Retirement Fund of the Sisters of St. Francis of the Immaculate Conception, 2408 W. Heading Ave., West Peoria, IL 61604.