BLOOMINGTON — Tears, laughter, and professions of love and gratitude filled St. Mary Church here May 29 as parishioners and friends from around the diocese bid farewell to the Franciscan Friars.

As with any good celebration there was also music and even some dancing in the aisle as Father Neri Greskoviak, OFM, prompted by the spirit of Carey Landry’s “And the Father Will Dance,” did just that. It was a fitting expression of the joy that the Friars and parishioners have taken in each other for 135 years. 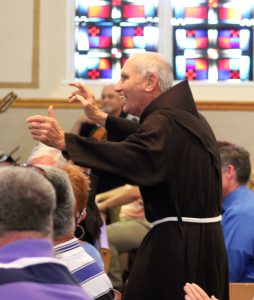 Inspired by the song, “And the Father Will Dance,” Father Neri Greskoviak, OFM, parochial vicar, got up and did just that. (The Catholic Post/Jennifer Willems)

When the Order of Friars Minor of the St. John the Baptist Province returned pastoral care for the parish to the Diocese of Peoria on June 8, it marked the end of a relationship that started in 1881, and makes Father Neri, Father Ric Schneider, OFM, and Brother Kevin Duckson, OFM, the last members of the province to serve in central Illinois.

“You are a dream for every pastor, you really are,” Father Ric, the pastor there for 23 years, told the people who filled every available space in the church, choir loft, sanctuary and gathering space. “You are what every pastor hopes to have because . . . of the spirit of joy here, the spirit of cooperation. It’s just phenomenal.”

Contained within the word “joy” is the secret of their success, he said.

“J stands for Jesus, O for others and Y for yourself, and that’s the way this parish operates,” Father Ric explained. “Jesus is first in everyone’s lives and we do have many outreaches to others. It’s only then that we think of ourselves.”

Other than coming together to praise God, building a strong community is the most important thing that has happened at St. Mary over the years, he said.

“As I’ve told so many people, if you love Greg Nelson, our new pastor, the way you love me, everything will be fine here at St. Mary’s and ‘Action on Jackson’ will continue,” Father Ric said, asking for an “Amen!” He got it, as well as sustained applause.

Offering his thanks, Father Neri, parochial vicar, encouraged the people to remain joyful, even during the uncertainty of transition. He prayed that their spirit of joy would not only continue, but grow and deepen. 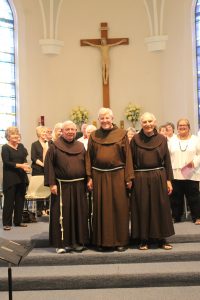 Brother Kevin, who has cared for the church, parish buildings, garden and cemetery, received applause and a standing ovation for his 50th anniversary of profession as a Franciscan. He has served at St. Mary for 20 years.

“I want to thank each and every one for their support and generosity and the friendship they have shown me throughout the years,” he said, and offered special thanks to the Secular Franciscans of the St. Margaret of Cortona Fraternity for allowing him to be their spiritual assistant.

Growing emotional as he talked about leaving St. Mary, he received support from a parishioner who called out, “We love you, Brother Kevin!” He assured them of his love and prayers in return.

Among the guest speakers was Msgr. Doug Hennessy, the former pastor of Holy Trinity Parish in Bloomington, who thanked the Franciscans on behalf of the priests and people of the Diocese of Peoria.

“We have been enormously blessed by your presence and your faithful service and we are profoundly grateful for that service,” he said. “You have allowed us to see the reality of what the legacy of Francis means in our day. Our loss is Cincinnati and Oldenburg’s gain. May you continue to embody the spirit of St. Francis and the Holy Spirit.”

To let them know that the Franciscan spirit would continue to live on in the community as well as their hearts, Mary and Deacon Loren Keim unveiled street signs that read Franciscan Way. The couple worked with the City of Bloomington to secure the designation and the signs were to be installed at the corner of Jackson and Mason before the Friars left.

To make certain the lines of communication stay open, the Franciscans received iPads from their parishioners.

As a closing pledge to one another, Friars and friends sang, “You Shall Not Tire.”

The well wishes and hugs continued at a reception in the school gym after Mass.

Father Ric and Brother Kevin will be moving to St. Clement Friary in Cincinnati, Ohio, while Father Neri will live at Holy Family Friary in Oldenburg, Indiana.

EDITOR’S NOTE: More photos from the farewell celebration have been posted to The Catholic Post’s site on Facebook.