Catholic men must call on their God-given masculine attributes to be merciful and loving witnesses of Jesus in today’s culture.

That was a message repeated throughout the morning April 23 when nearly 500 men from across the Diocese of Peoria took part in the 13th annual “A Call to Catholic Men of Faith.”

“So often we think that mercy and masculinity are opposed,” said Father Timothy Hepner, diocesan vocations director of recruitment. But Father Hepner — the featured speaker at a rally at the Peoria riverfront preceding a prayerful mile-long walk to St. Mary’s Cathedral — said imitating Jesus the Good Shepherd is a difficult challenge that requires a man to entrust his passions and energies to God’s grace. 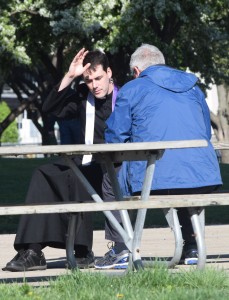 Father Timothy Hepner offers absolution to one of the dozens of penitents who received the sacrament of reconciliation at the start of the men’s march rally along the Peoria riverfront on April 23. (The Catholic Post/Tom Dermody)

Bishop Jenky put it succinctly in his homily at a Mass that followed the march.

“Brothers, heaven is not for cowards,” he told the packed cathedral, including many men accompanied by young sons or grandsons.

“As men who belong to Jesus Christ,” continued Bishop Jenky, “we must promise to faithfully, even heroically, be there for all those God has given us to love and protect. And in these times, we will need to be brave.”

“A Call to Catholic Men of Faith” is an annual public witness in defense of faith, family, and the priesthood. It is a grassroots response to challenges issued by Bishop Jenky during a Mass at an Irish festival in Peoria in 2003, including the question “Why do we as Catholics not stand up and fight and defend our faith?”

This year’s theme was “Merciful Like the Father,” drawing from the Jubilee Year of Mercy proclaimed by Pope Francis. The morning began with dozens of the men seeking the sacrament of reconciliation from several priests stationed at picnic tables lining the banks of the Illinois River near downtown Peoria.

Among those priests was Father Hepner, who reminded the men in his pre-march talk that before confronting injustices and evil around them, they must recognize that “the first person that needs mercy is you, is me.”

He encouraged them to direct their energies toward real threats, which most often are not persons, but sin. For example, in battling pornography, the enemy is not those portrayed in photos or videos, but our own lust and pride. When children or grandchildren wander from the church or ignore its teachings, he continued, the enemies are “errors that come from Satan, the Father of Lies” or a bad experience the person had with someone in the church.

Combat those and all enemies with the “self-giving, self-sacrificing love” Jesus modeled on the cross, said Father Hepner.

Bishop Jenky — who met the men at the riverfront and accompanied them to the cathedral, riding in a golf cart — also urged the men to dedicate their masculinity to God and the service of their neighbor. He asked them to make a series of promises. 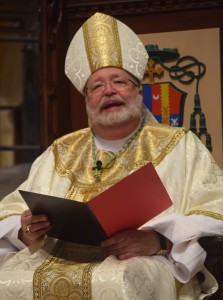 In his homily, Bishop Jenky urged Catholic men to “really get to know Jesus” and promise to “faithfully, even heroically, be there for all those God has given us to love and protect.” (The Catholic Post/Tom Dermody)

“We must promise, with the help of God, to be better men, better priests and religious, better servant spouses, better fathers and sons, better brothers and friends,” said Bishop Jenky in his homily.

“We must promise to do our best to bring others to the Lord and to witness to everyone we meet the new life that we share in Christ,” he continued. “We must promise to always be men of the church, always ready to defend the faith, in season and out of season, whether other people like it or not.”

The bishop called the men, starting with himself, to continuing conversion.

Even at age 69 — after five decades in a religious community, more than 40 years as a priest and 14 years as bishop of Peoria — Bishop Jenky said he still must ask himself “Do I really know Jesus?”

“Christianity is always a journey, an adventure, a pilgrimage of wonder and awe,” said the bishop. Catholics, he said, must always be ready to learn from Jesus “over and over again.”

In welcoming remarks at the start of the pre-march rally, Deacon Mike Schallmoser of St. Philomena Parish in Peoria drew applause as he told Bishop Jenky that the men of the diocese “are eternally grateful to have you as our shepherd and are proud to stand with you to proclaim Christ not only today, but always.”

Father Eric Bolek, parochial vicar of St. Jude Parish in Peoria, led the pre-march prayer, asking God “that we will always continue to be men of faith, men of conviction, men of righteousness” and examples to those lacking in such virtues.

While for many participants the men’s march is an annual event, this was the first year for Tom Yaniak, a Cub Scout den leader at St. Patrick Parish in Washington.

“I was impressed with how many men came and how reverent everyone was,” he told The Catholic Post. It was the third rally for Kurt Schmidt of St. Mary Parish in Rock Island. “It’s a chance to share a day with a great group of guys,” he said, and set an example of faith for their families.

EDITOR’S NOTE: More photos from “A Call to Catholic Men of Faith” have been posted on The Catholic Post’s Facebook site. A video of the march, seen below, features Catholic Post photos and video and is set to music composed by Tom Dermody, editor, and sung by Harry Williams. Video production by Daryl Wilson.