The bust of Archbishop John Lancaster Spalding that peers at visitors to his new exhibit at the Museums of the Diocese of Peoria is surrounded by artifacts more than a century old, including a chalice from 1878 and vestments the first Bishop of Peoria wore at his episcopal silver jubilee in 1902.

The age of the bust itself? It’s not even close to 100. One hundred days, that is. 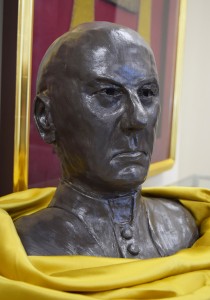 The bust of Bishop Spalding, created by Nic Wilson, as seen in the new exhibit at the diocesan museum.

The likeness was created for the exhibit by Diocese of Peoria seminarian Nic Wilson, who accepted the challenge just before Christmas even though he hadn’t  worked with clay since grade school.

“In high school (Peoria Notre Dame, Class of 2013), I did some digital sculpting as a hobby, which prepared me — at least in principle — to look closely at Spalding’s features and reproduce them,” he told The Catholic Post.

When it became clear it was not feasible to transport a magnificent marble bust of Bishop Spalding that is a treasure of the Spalding Council Knights of Columbus at its Peoria clubhouse, Philip Lee of the Office of Divine Worship suggested an alternative to diocesan archivists Sister Lea Stefancova, FSJB, and Sister Ann Gill, FSJB:  create a new one.

“I was blessed to work with Sister Ann and Sister Lea in the archives for two summers, and so I was happy to do whatever I could to help them with this exhibit,” said Wilson, a third-year college seminarian at Immaculate Heart of Mary in Winona, Minnesota.

The first attempt was, well, a bust.

“Over Christmas break, my mom (Lori, a member of St. Jude Parish in Peoria) and I used a Styrofoam head as a base and covered it with some generic brand clay,” said Wilson. The mother-and-son team worked on it for 18 hours, but while it was drying their home lost power in a storm, causing irreparable cracks to the form.

For a second attempt, Wilson bought a higher quality, air-dry clay. His mother built the basic head shape over the course of two months. When Nic returned to the area on spring break, he added the details.

A DETERMINED MAN OF VISION 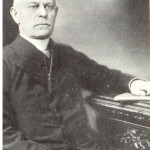 Wilson said he looked at many photos of Bishop Spalding’s face during the sculpting process.

“In every picture, he has the same look,” said Wilson. “His expression sums up what I admire about Bishop Spalding. He was a man of determination, dedication, and perseverance, a man of vision whose efforts provided a strong foundation for our diocese and still bear great fruit today.”

It would seem, a century later, similar qualities were required of a seminarian who took up quite an artistic challenge.