Whether they came home early or stayed and were stranded in a blizzard on a Pennsylvania roadway or in a Washington, D.C., hotel room, hundreds of pilgrims from the Diocese of Peoria will long remember the 2016 national March for Life.

Among those staying and marching as winter storm Jonas approached was a group of 38 pilgrims from the parishes of St. Mary, Moline, and St. Mary and St. Anne in East Moline. While the group got out of the city quickly via the subway to catch their chartered bus in Virginia, their vehicle was among hundreds stranded for 20 hours when a seven-mile stretch of the Pennsylvania Turnpike closed at about 8 p.m. Friday night. 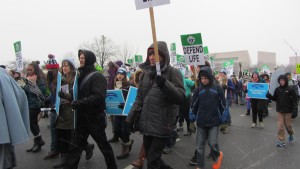 Pablo Jaramillo, foreground, and Father Chase Hilgenbrinck, to his right, were among 38 participants in the March for Life from parishes in Moline and East Moline. (Provided photo)

“My biggest fear was if we had enough fuel to keep the bus running” and providing heat, said Father Fredi Gomez Torres, pastor of the three parishes. He and Father Chase Hilgenbrinck, parochial vicar, led the pilgrimage — the parishes’ ninth annual trip to the March for Life.

The fuel held out, and snacks of granola bars, juice and water became breakfast after the group slept on the bus. Local residents brought pizzas to stranded motorists in the early afternoon.

Father Gomez Torres said the Quad Cities pilgrims passed the time by praying the rosary, the liturgy of the hours, the Divine Mercy Chaplet, a novena, watching movies, or going outside to play or dig in the snow.

When they did go outside, “almost every person we saw — Sisters, religious brothers, lots of young people – almost all of them were in the March for Life,” said Father Gomez Torres.

Father Gomez Torres said he was aware that one group nearby organized a Mass on an altar made of snow, accounts of which have been widely shared on social media.

By the time the road was cleared of two feet of snow and the bus began moving again at 5 p.m. Saturday, “we still had granola bars left,” said Father Gomez Torres.

Meanwhile, a group of 10 students and two chaperones from Schlarman Academy in Danville also stayed for the march. They had no option to leave the city — they had taken a flight in and all airports were closed. So they returned to their hotel.

“From about 7 p.m. Friday night until 1 p.m. Monday we never left the hotel,” said Cindy Rongey, who served as a chaperone with Tracy Taylor. 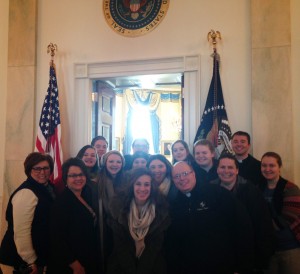 While in Washington, D.C., pilgrims from Marquette Academy in Ottawa were able to tour the White House thanks to a faculty member’s connection with a worker there. (Provided photo)

“On Sunday morning we had a little prayer service since there was no transportation to get to Mass,” she wrote in a report shared by Gail Lewis, principal. “I read the readings for Sunday and read a homily that I found on the Internet. We prayed petitions and prayed a spiritual Communion.”

While at the hotel, the group ate food they had purchased at an underground mall or at a bistro in their hotel.

“I will take this group anywhere, anytime,” said Rongey. “They were great.”

Other high school groups from the diocese — including from Peoria Notre Dame, the High School of Saint Thomas More in Champaign, Bloomington Central Catholic, or Marquette Academy in Ottawa, decided to forego the march and beat the blizzard home.

The groups had already done a lot in the nation’s capital, including touring the city on Thursday, visiting the Basilica of the National Shrine of the Immaculate Conception, and attending the pre-march youth rally and Mass at the Verizon Center. 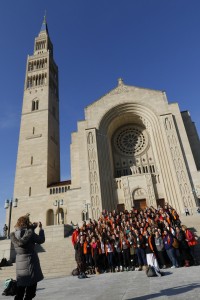 Students and staff from Peoria Notre Dame High School pose on the steps of the Basilica of the National Shrine of the Immaculate Conception in Washington Jan. 21 after arriving for the opening Mass of the National Prayer Vigil for Life. CNS/Gregory A. Shemitz

“They were a little disappointed, obviously, about missing the march,” said Father Peter Pilon, chaplain of Central Catholic, which sent 47 students. “But once they saw the weather reports, they weren’t too disappointed.

Father Pilon and Sean Foster, principal, kept in communication with parents via email. While the trip was cut short, it still achieved its goal of helping the students “recognize the importance of standing up and witnessing to life” and strengthening their faith, said Father Pilon.

“The Lord accomplished a lot in their hearts,” agreed Sister Sara Kowal, SCTJM, who accompanied 90 students and 21 chaperones from Peoria Notre Dame.  The experience “taught important lessons,” she told The Catholic Post, including that God’s plans are not always our plans and sufferings and sacrifices we embrace bear fruit.

The group of 10 students and five chaperones from Marquette Academy in Ottawa had to get creative in order to return home. They had taken a train to Washington on Tuesday, but organizers learned Thursday there would be no train service on Friday.

So they rented vans to begin the drive home Friday morning.

“We joined those marching spiritually,” said Father Jacob Rose, chaplain. They prayed for pro-life intentions, including the conversion of legislators they intended to visit, and are still participating in the march by writing letters to senators and representatives as a follow-up.

During their time in Washington, the Marquette group went through the Holy Doors at the Cathedral of St. Matthew, attended the “Life is Very Good” rally in Arlington, Virginia, and even had a tour of the White House arranged by the daughter of the school’s Spanish teacher.