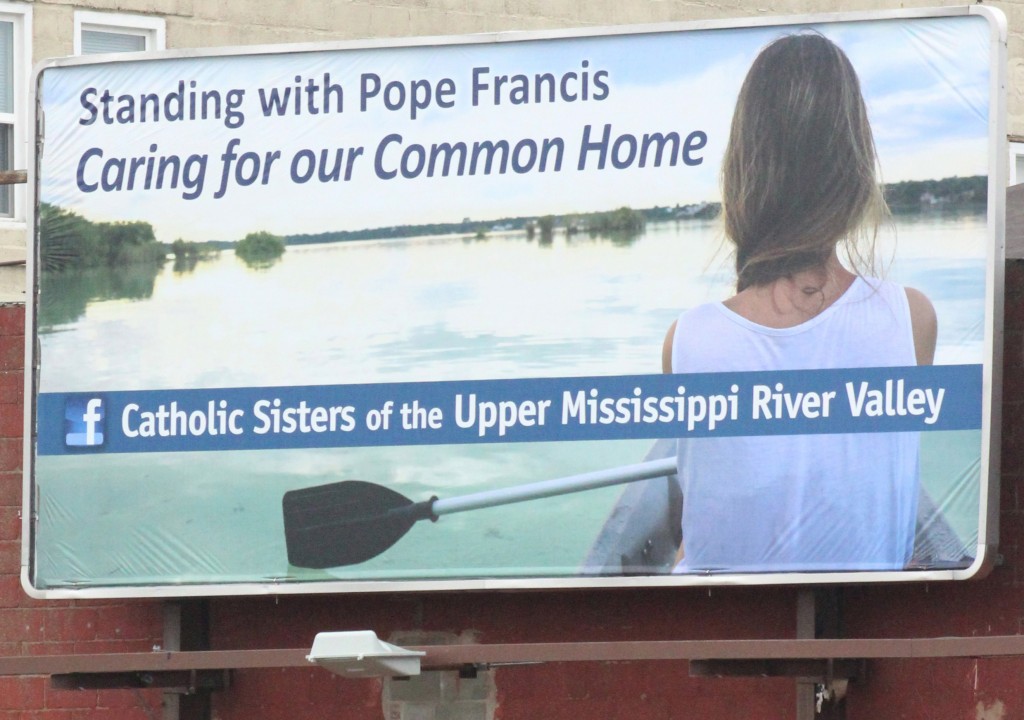 This billboard, one of 22 sponsored by Catholic Sisters in the Upper Mississippi River Valley, is located in Rock Island. (The Catholic Post/Jennifer Willems)

ROCK ISLAND — With the eyes of many political analysts trained on Iowa, where the caucuses will be held Feb. 1, Catholic Sisters in the Upper Mississippi River Valley are hoping to catch a few of them with billboards reminding candidates, delegates and voters that care for the environment matters.

“I see it as a call to awareness,” said Sister Sandra Brunenn, OSB, prioress of the Benedictine Sisters of St. Mary Monastery in Rock Island. “We are encouraging people to take into account as they’re reflecting on their choices about the candidates what Pope Francis is saying is of vital importance today.”

The 22 billboards in Iowa and Illinois carry the same message the 11 religious communities shared in ads in USA Today and diocesan newspapers when Pope Francis visited the United States in September: “Standing with Pope Francis; Caring for our Common Home.” The text takes its cue from the title of the pope’s encyclical “Laudato Si’, On Care for our Common Home,” which was promulgated last June.

They went up on Jan. 11 and will continue to be seen through Feb. 7.

Billboards can be found in Rock Island, across from the Quad Cities Botanical Center, and on John Deere Road in Moline, just beyond Interstate 74, according to Sister Sandra. With so much traffic back and forth across the Mississippi River the displays were needed on both sides, she said.

“Environmental awareness and concern have been part of our educational mission for a long time,” she told The Catholic Post. “We were very excited when Pope Francis issued the encyclical and wanted to do everything we could to support him.”

In addition to sponsoring the billboards, the Sisters planned ecumenical “Care of Earth” prayer services. The Benedictines and Sisters of the Humility of Mary were to gather near the billboard at 410 E. Fourth St. in Davenport on Jan. 27, with Sister Marilyn Ring, OSB, as one of the leaders. The Sisters of the Humility of Mary will lead people in prayer again on Sunday, Jan. 31, at noon at 1808 42nd St. in Des Moines.

Sister Sandra said the short ceremonies would include song, reflective quotations from the pope’s encyclical, prayers of petition and a blessing for the billboards.

“We must care for Earth and each other by our own actions, by engaging in dialogue with others, and pressing our lawmakers to prioritize bold action to turn the tide for climate justice,” said Sister Joy Peterson, PBVM, a member of the Catholic Sisters for a Healthy Earth Committee. The group initiated the plan for the billboards.

Sister Sandra said this isn’t the first time the religious communities have used billboards to remind people of Gospel values. When immigration was an issue in 2012, the Sisters sponsored billboards with the words of Jesus from Scripture: “I was a stranger and you welcomed me,” but the word “stranger” was crossed out and “immigrant” was put in.