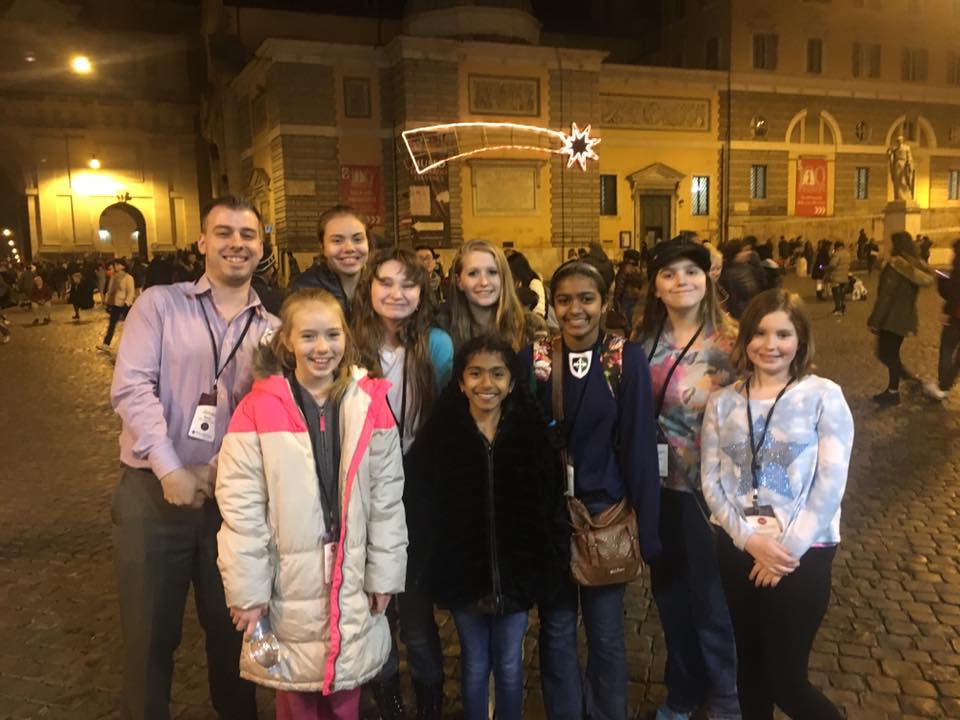 Members of the Peoria Affiliate of the Pueri Cantores ("child singers"), conducted by James Marck, were among 5,000 young people singing for the pope during an International Congress in Rome. (Provided photo)

Megan Tucker knew that she would be one of 5,000 young people singing for Pope Francis during the International Congress of Pueri Cantores in Rome after Christmas, but she got a souvenir she didn’t expect.

At the opening ceremony the eight singers of the Pueri Cantores Peoria got separated from conductor James Marck and ended up along the aisle in the Sala Nevi with their parents and chaperones. As the pope walked through the hall, he shook hands with the young singers — including Tucker, 15, a sophomore at Peoria Notre Dame High School.

“At first I didn’t believe it,” Tucker said, noting that that neither the Pueri Cantores nor the pontiff had time to exchange greetings.

(Related story: “God had a plan” for Majestic Italy choir, pilgrims in Italy)

In addition to giving them the memory of a lifetime, Pope Francis gave them a life lesson, according to Marck, who started the Peoria Affiliate of Pueri Cantores at Sacred Heart Church in Peoria in 2011. 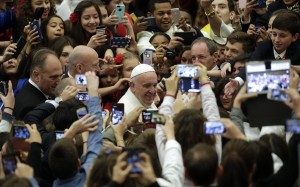 Pope Francis arrives to lead a special audience with the International Congress of Pueri Cantores in Paul VI hall at the Vatican Dec. 31. CNS/Max Rossi, Reuters

“He gave the kids a slogan, ‘Canta camina’ — sing while you walk,” Marck told The Catholic Post after the group returned from their Rome trip in early January. “I took that to be consistent with the rest of the papal message, which is about reaching out to the poor and the marginalized. Take your song out of the choir loft and into the peripheries of society.”

The international gathering brought students together for Masses and concerts from Dec. 28 through Jan. 1, culminating with a papal Mass at St. Peter’s Basilica. While singing for the pope was a highlight, Marck said the Pueri Cantores (“child singers”) had another as they waited in line to get through security.

“All the singers were in one spot and something impromptu happened. Groups started singing,” he said. “There was a French choir, a choir from Germany and a choir from South Korea and they started doing a sing-off. We tried singing French songs they knew and the French choir did ‘Let It Go.’ It went on for about an hour.”

Tucker said experiences like that allowed her to make friends with members of a Polish choir. They have already connected on Facebook and she sends them messages during lunch at Notre Dame.

“The people behind us at the New Year’s Mass were from Dublin. That was exciting because that’s where we stopped on the way home,” she said.

Another highlight was a stop in Assisi, which was “just gorgeous,” Tucker said. She traveled with her mother, Kathy, and younger sisters Carrigan, 12, and Abby, 11, who are all members of Sacred Heart Parish in Peoria. The long Franciscan presence there made the trip to the tomb of St. Francis even more special for the family.

In addition to the Tuckers, those making the trip were Kate and Mary Sanderson and their mother, Lisa Sanderson, from Holy Family Parish in Peoria; Rachel and Mariel Kottoor, and their mother Sunita Kottoor, of St. Vincent de Paul, Peoria; Regan Dennhardt and her parents Todd and Karla Dennhardt of St. Thomas the Apostle, Peoria Heights; and Brynn Harty and her mother Melissa Harty of Fort Wayne, Indiana.

“Families often pair with groups within their region,” Marck said.

A musical high note came during Mass for the English-speaking Pueri Cantores federations on Dec. 29 at the Basilica of St. John Lateran, Marck said. That Mass alone brought together more than 2,000 young singers. 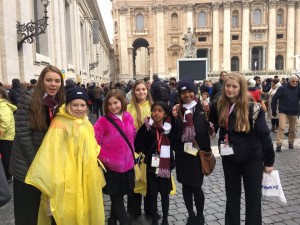 In St. Peter’s Square are members of Pueri Cantores Peoria (from left) Kate and Mary Sanderson, Abby and Carrigan Tucker, Mariel and Rachel Kottoor, and Megan Tucker, who got to shake hands with Pope Francis. (Provided photo)

“I liked the idea of the kids realizing they are part of the whole world — not just our church or school,” Kathy Tucker told The Post. “They got connected in a way they didn’t know they were connected to our faith around the world.”

She also liked that the young people were singing for others.

“They learned a song in Italian and we were told it was the pope’s favorite Christmas carol,” Kathy Tucker said, as her daughters called out “Tu sciendi dalle stele,” the name of the carol. “That was their favorite. They loved singing it.”

They also prepared and sang the “Missa de Brevis” by the late Cardinal Domenico Bartolucci, “Ave Verum Corpus” by Edward Elgar, and the Hallelujah Chorus from Handel’s “Messiah.”

Marck said the trip was fun, but really brought into sharper focus what Pueri Cantores is all about, which is fostering Catholic identity through music. The prime application of that is through the liturgy.

“They will never be put in concerts. They will never be in recitals. It’s about liturgy,” he explained. “Other organizations, secular and sacred, tend to focus on academics and performance, while when we teach music fundamentals we teach it by necessity. We go straight from learning it to applying what we learned at Mass.”

For more information on Pueri Cantores, contact Greg Etzel, director of sacred music in the diocesan Office of Divine Worship, at (309) 671-1550.