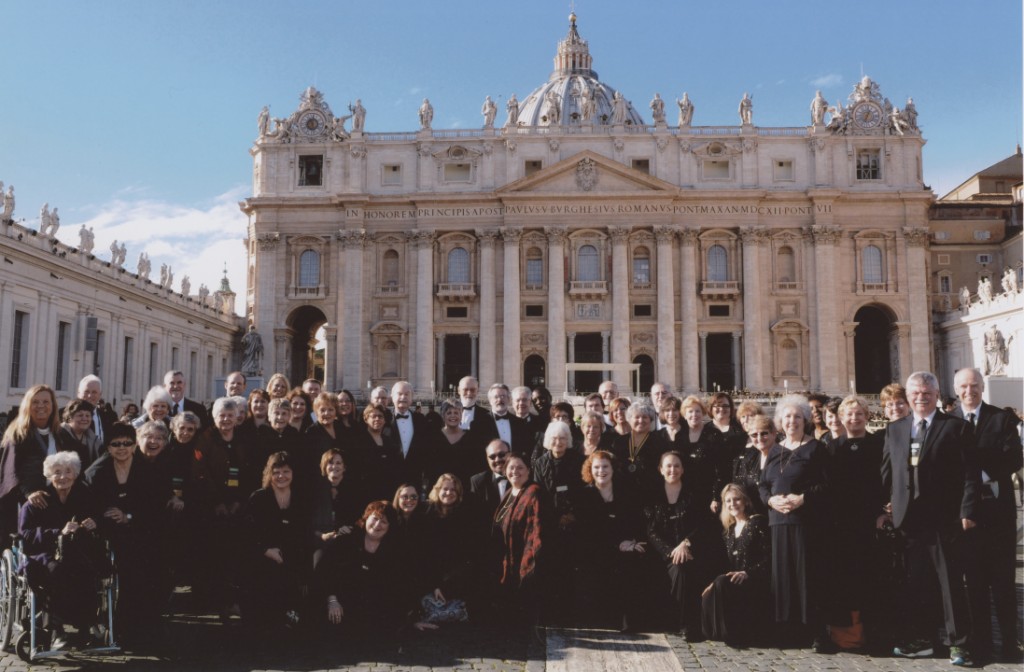 God had something special in mind for the St. Anthony Camerata Chorale Festival Choir and Mary Ann Fahey-Darling said because of it the 31 singers and their traveling companions reaped blessing after blessing during their musical pilgrimage to “Majestic Italy.”

“God had a plan and it was so much bigger than us,” she told The Catholic Post on Jan. 10, the day after returning to central Illinois. “Every time something would happen and something so beyond your scope would come back we said, ‘God had a plan.'”

Who could have known, for example, that the choir would be invited to sing a song before the Mass celebrated by Pope Francis at St. Peter’s Basilica for the Solemnity of the Epiphany on Jan. 6? “We were just supposed to be part of the choirs singing for the Mass,” said Fahey-Darling, who is director of liturgical music at St. Anthony Church in Bartonville.

They seized the opportunity, filling the basilica with Hans Leo Hassler’s “Dixit Maria.” 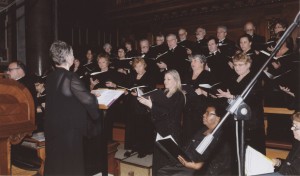 Other moments were more difficult, such as when they discovered that the printed program for their concert for the people of Rome at the Church of St. Ignatius was in a different order than they were prepared to sing. Fahey-Darling said it set everybody on edge, but they made the change, prayed and then gave the performance to the Lord.

“My husband, who was a pilgrim, said we sounded better when we thought we had nothing to give that night than we had throughout the entire journey,” said Lynette Broers Brady of St. Jude Parish in Peoria, who made the trip with her husband Jeff.

She noted that everyone was a little tired and illness had started to kick in, but “the translation of the Holy Spirit and this beautiful place elevated it and that’s what God does with everything we do.”

“Mary Ann told us we didn’t do it for ourselves. We did for God,” she said.

That spiritual focus was part of Fahey-Darling’s plan from the beginning.

Setting the tone from the very beginning was their spiritual director, Father Severine Mushumbusi, a priest of the Diocese of Kahama in Tanzania, East Africa. He is studying at the Salesian Pontifical University in Rome and agreed to assist the group when Msgr. William Watson became ill and was unable to go with the choir.

One of the singers, Nancy Davis of Holy Family Parish in Lincoln, knew of his brother, Father Fortunatus Rwehikiza, who is studying at St. Ambrose University in Davenport, Iowa, and he helped them connect.

“The highlights were the Masses that we had with Father Severine,” Fahey-Darling said. “He said Jesus needed to come into our hearts. After he talked about our brokenness that first night and how we don’t think we’re worthy to be where we are, now we needed to learn to take Jesus into our hearts and experience the Gospel.”

The first Mass, in a small chapel at the Basilica of St. Clare in Assisi, was a defining moment for many of the pilgrims. Bill Bulfur of East Peoria said he’ll never forget how the sound of their singing bounced off the walls and how intimate the liturgy was.

He added that their Mass on Jan. 1 at the Basilica of St. Francis was not only joyful, but gave him food for thought as he realized what the saints gave up for their faith, often paying with their very lives. 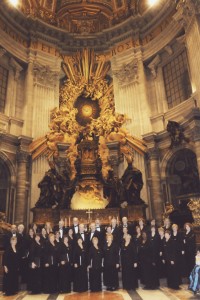 The 31-member choir poses for a photo in front of the Altar of the Chair of St. Peter and St. Peter’s Basilica after singing for Mass. (Provided photo)

Davis said she collected prayer intentions from family and friends and put them into a book with the intention of carrying them through the Holy Door at St. Peter’s Basilica.

“That took on huge meaning for me,” she said. “It was for the needs of others, not for myself.”

“It was a grueling trip,” Davis said. “We did a lot of walking and not a lot of sleeping, but it was all worth it.”

“I don’t think any of us were completely prepared. We knew we’d be busy. We knew there’d be a certain level of tiredness,” Broers Brady said. “It was definitely a pilgrimage.”

And just as they depended on one another for strength and support, they needed one another to make the music they wanted to give to the Lord, she said.

“One voice can’t make that sound by itself. Singing together elevates it to another level,” she said. “Praying twice — I totally agree with that.”