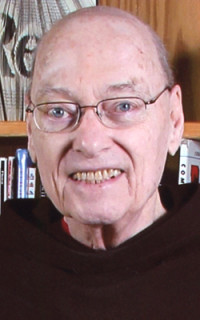 BLOOMINGTON — A Mass of Christian Burial was offered Dec. 30, 2015 at St. Mary Church for Father Gregg Petri, OFM, a native son of the parish who had served as parochial vicar and director of Hispanic ministry there since 2003. Burial followed in St. Joseph Cemetery.

Father Jeffrey Scheeler, OFM, provincial minister of the St. John the Baptist Province of the Order of Friars Minor, was main celebrant for the Mass, with Father Neri Greskoviak, OFM, parochial vicar at St. Mary in Bloomington, as the homilist. Bishop Daniel R. Jenky, CSC, attended and gave the final commendation.

The son of Nicholas and Lillian (Ray) Petri, Donald Petri was born Sept. 15, 1933, in Bloomington. He attended elementary school in Kansas City, Missouri, and St. Mary School in Bloomington and went to Trinity High School for one year before going to St. Francis Seminary in Cincinnati, Ohio.

He entered the novitiate of the Order of Friars Minor at St. Anthony Friary in 1952, receiving the Franciscan habit and taking the name Gregg. He professed first vows in 1953 and solemn vows in 1956, during his studies at Duns Scotus College in Southfield, Michigan.

Father Gregg completed his studies for the priesthood at St. Leonard College in Centerville, Ohio, and was ordained on June 13, 1961.

From 1962 until 1980, Father Gregg ministered in the American Southwest, serving as a teacher, guidance counselor and superintendent of schools for the Diocese of Gallup, New Mexico. Parish ministry also took him to Gallup, Aztec, Roswell, Albuquerque and Grants, New Mexico.

In addition, he was a member of his religious community’s provincial council from 1978 to 1980.

Father Gregg was involved in parochial ministry in Ohio, Michigan, Louisiana, Kansas, Illinois and Texas for the next 10 years. In the Diocese of Peoria he served as pastor of St. Mary in Metamora from 1985 to 1987, and as parochial vicar at St. Boniface in Peoria from 1990 to 1991.

He studied Spanish for a year in Bolivia and after earning a certificate of merit from the Maryknoll Language Institute began his ministry with the Hispanic community in Indiana, New Mexico, Pennsylvania, and his home parish of St. Mary in Bloomington. When he celebrated the 50th anniversary of his ordination in 2011, Father Gregg told The Catholic Post that this ministry was “the great love affair of my life.”

“I think I can be a bridge — many people know that I grew up here and are willing to listen to me,” he said then, explaining that he had become involved in programs that reach out to the Spanish-speaking community. “The town knows that St. Mary’s is where the Hispanics are ministered to. I want to make sure they are also listened to.”

Preceded in death by his parents, Father Gregg is survived by his sister, Juanita (Robert) Edgington, and brothers Nicholas (Norita) Petri Jr., and Darrel (Jennifer) Petri, nieces and nephews, and his Franciscan community.