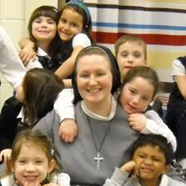 Photo Caption: Sister Mary George Brown, a member of the Sisters of St. Francis of the Martyr St. George, is surrounded by some of her music students at St. Matthew School in Champaign.

Open to going wherever God leads them, the Sisters of St. Francis of the Martyr St. George are as comfortable serving in the kitchen as they are in the executive offices of OSF Healthcare System in Peoria, according to Sister M. Talitha Eckstine, FSGM.

“We just get in there and do the groundwork,” said Sister Talitha, local superior of the Franciscan community in the Diocese of Peoria and a registered nurse working in medical exercise at the RiverPlex Recreation and Wellness Center in Peoria. “Our community is notorious for staying and cleaning up because that’s our role. We see ourselves as servants, in a way. To offer support.”

Like many communities of that time, the Sisters of St. Francis of the Martyr St. George were established to care for orphans and the poor. Sister Talitha said their foundress, Mother M. Anselma Bopp, FSGM, told her Sisters “to be simply ready” and they continue to make that their mission nearly 150 years later.

“We’re just simply ready to do whatever the church calls us to do,” she told The Catholic Post. “That leads to another one of her sayings that we quote a lot: ‘Obedience works miracles.’ We see it over and over and over again.”

Both maxims have helped the community to keep a firm footing in health care while expanding into education, child care, care for the elderly and retired priests, parish and diocesan work, domestic and secretarial work, and social services. They have also taken the Sisters around the world.

FRANCISCAN COUSINS
Based in Thuine, Germany, where the community was founded, the Sisters have provinces in Holland, Japan and Indonesia, as well as the United States. They have had a presence in Albania since 2001; Assisi, Italy, since 2005; Rome since 2008; and Havana, Cuba, where they serve at a seminary, since 2011.

The Sisters of St. Francis of Martyr St. George came to the United States in 1923 and established a motherhouse in Alton. They now have “daughterhouses” in Missouri, Oklahoma, Nebraska, New Jersey, Ohio, and Kansas, and work at the Vatican Embassy in Washington, D.C.

In the Diocese of Peoria, the Sisters teach at St. Matthew School and The High School of Saint Thomas More in Champaign and Alleman High School in Rock Island. Sister Talitha and two other Sisters came to Peoria as the result of a merger between the community’s Saint Anthony’s Health Center in Alton and OSF Healthcare System last year.

“Saint Anthony’s was a stand-alone hospital. We weren’t part of a large system,” Sister Talitha explained. “We were finding it increasingly difficult to maintain stability, although we were keeping on.”

During their discussions about the merger, officials from the Alton community and The Sisters of the Third Order of St. Francis of East Peoria, who own and operate OSF Healthcare System, discovered that both had been part of the Sisters of the Holy Cross in Germany at one time. When Saint Anthony’s Health Center became an OSF partner, the East Peoria Franciscans invited their “cousins” to work with them.

Housed in the East Peoria motherhouse temporarily, the Alton Franciscans now live in the house that previously served as the convent for the Sisters of St. Joseph of Carondelet, near Holy Family Church in Peoria.

In addition to allowing them to learn from a health care system that is strong in research and medical advancements, Sister Talitha said their work with OSF provides another opportunity to make the merciful love of Christ visible to everyone they meet.

“Even going down to the RiverPlex has been a huge leap for me because it’s not something I ever thought of,” she said. “But being down there the ministry is huge. I’m in awe of it. There’s such a need for (Christ’s) presence everywhere.”

The Sisters dress in habits and people feel free to visit and ask questions throughout the day, she told The Post.

“We all have that desire for Him, whether we know it or not,” she said. “Why else would they come up and talk to me?”

SISTERS OF ST. FRANCIS OF THE MARTYR ST. GEORGE
Alton

FOUNDED: 1869 in Thuine, Germany
FOUNDRESS: Mother M. Anselma Bopp, FSGM
SUPERIOR GENERAL: Mother Margaretta Maria Brand, FSGM
MEMBERS: Nearly 1,200 worldwide, with 120 in the St. Elizabeth of Hungary Province (United States) — 13 of them serving in the Diocese of Peoria
CHARISM: “To receive the merciful love of Christ and to make this merciful love visible to those we meet.”
APOSTOLATES: Health care, education, child care, care for clergy, house of formation, adoration Sisters, and care for the universal church.

“Do not lose courage even though your lot seems hard. Take refuge in the Sacred Heart of Jesus when you feel oppressed, for there you will always find consolation.”
Mother M. Anselma Bopp, FSGM
Foundress