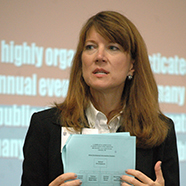 Those who help raise money to fund Catholic parishes, schools, and institutions in the Diocese of Peoria were reminded Oct. 15 that what they do is a “holy business.”

“If it’s a ministry to educate young people, if it’s a ministry to anoint the sick and dying, how can it not be a ministry to attract the resources to carry out those other ministries,” asked Richard Garrigan, executive director of the Catholic Organization of Development Executives and president of an Omaha-based consulting firm for Catholic institutions.

Garrigan was a featured speaker at the 2015 Diocesan Development Day, which brought nearly 100 pastors, principals, and parish and school development personnel to the Spalding Pastoral Center to strategize and support one another.

Acknowledging that some don’t like to ask for money because they believe “people will think ill of me,” Garrigan repeatedly challenged those in attendance to “open your hearts and minds” to see their work in terms of ministry and invitation.

“We’re all part of a divine mission and we have a divine assignment,” said Garrigan. He reminded the group that “the only thing Jesus talked about more than the Kingdom of God was money.”

In offering basic principles of development, Garrigan emphasized the importance of understanding the mission of their Catholic institution and then communicating it often and in a compelling way. He defined mission as “why we exist, what we do, and the resources required to get there.”

Noted Catholic figures such as Blessed Mother Teresa and St. Ignatius Loyola were “people who had a vision of what they wanted to accomplish,” said Garrigan. “Your vision can and should be every bit as compelling.”

ORGANIZATION IS KEY
The day explored principles of sound business management, effective public relations, stewardship, and the various ways people can give. Special emphasis was on promoting bequests and planned giving, as well as the growth of online giving and social media.

Paula Moss, executive director of annual giving for Benedictine College in Atchison, Kansas, said organization is key when planning and carrying out an annual funding campaign.

“You have to write down a plan,” said Moss, a former executive director of the Catholic Charities Foundation for the Diocese of Kansas City. She suggested that each annual campaign set “three attainable goals” and then “get them done.”

Expressing gratitude for gifts in a timely way is also important, said Moss, suggesting that thank-you notes be sent within 48 hours.

“A thank you is not an afterthought,” she said.

Bill Engelbrecht, director of advancement for the Diocese of Peoria, noted that charitable giving was up 7 percent in the United States last year. Prior to offering an opening prayer, Msgr. Paul Showalter, vicar general, reminded the group that there are many in their parishes with skills and interest to assist in development work, and are waiting to be asked.