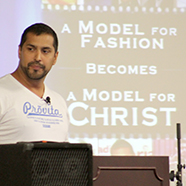 Photo Caption: Mario St. Francis speaks Sept. 18 at the Wake Up the World Conference at the Spalding Pastoral Center in Peoria.

Mario St. Francis had it all.

One of the youngest American men to play semi-professional soccer in Costa Rica, he also found fame and fortune as an actor and model for Tommy Hilfiger. He was dating a beautiful model and on the verge of competing for the title of Mr. World, when everything changed.

He sustained a compound fracture during an accident while working out and as he lay bleeding on the couch, St. Francis realized that none of what he had mattered. None of what he had accomplished could help him.

“At the end of the day, what’s most important is relationships with others — love, especially for your loved ones and for God. He’s the beginning and the end,” he told nearly 400 students who gathered at the Spalding Pastoral Center in Peoria for the Wake Up the World Conference, on Sept. 18.

“God gives us all of our talents and gifts. I was living a selfish life,” said St. Francis, a stage name he adopted after a profound conversion experience before the Blessed Sacrament while on retreat.

St. Francis was one of the keynote speakers at the Sept. 18-19 conference, which was sponsored by the Peoria Association of Religious Life as a way of celebrating the Year of Consecrated Life. The students attended a Mass with Bishop Daniel R. Jenky, CSC, as the presider, and heard vocation stories, collected souvenirs and information from the 13 religious communities that had tables at the conference, and enjoyed the music of Station 12, a band of musicians from St. Jude Parish in Peoria.

“GOD IS ETERNAL”
The badly broken hand wasn’t the only life-threatening situation in which St. Francis had ever been. By his reckoning he had 14 serious accidents in his young life and he explained that it was God’s way of trying to get his attention.

Born and raised in the Washington, D.C., area, St. Francis was the youngest of four boys of a family from Colombia, South America. He attended Catholic schools and was excited about his faith as child, but started falling away during high school when he didn’t encounter that same level of enthusiasm.

“When we don’t have role models in our life, people to look up to, we look around. We look around and the people who are next to us are our friends and we start seeing what’s important to them,” he said. That included going to parties and engaging in questionable behavior.

“I didn’t really feel like I fit that mold,” St. Francis told the students. “You know what happens when you don’t fit in? You try harder. I tried and tried to fit in and fitting into that group eventually meant leaving my faith in God.”

When he started to listen to God again, the self-professed “black sheep” jumped in with both feet. He considered the priesthood for a short time, attended World Youth Day and studied catechetics and apologetics at Franciscan University of Steubenville. Now married with two children, he travels the world preaching the New Evangelization called for by St. John Paul II.

Noting he always messed up when he was driving his life, St. Francis said he decided to turn the keys over to God and let him drive. When he did that, things started to fall into place.

He encouraged them to do the same thing by seeking out the sacrament of reconciliation often, going to Mass and receiving the Eucharist.

“It seems weird if I tell you I only shower once a month, right? Because we’re bodies and bodies smell — we’ve got to clean them up,” St. Francis said. “When’s the last time you went to confession? Because that’s how you wash your soul.”

Because “fame is fleeting but God is eternal,” St. Francis urged the young people not just to learn about their faith but to ask God to help them understand it. “Because our mission in life is to know God, to love God and to serve him. You cannot love what you do not know.”