Fr. Benjamin Reese, 57, dies; his battle with ALS inspired many 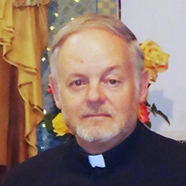 ASPEN, Colorado — A funeral Mass was celebrated on Friday, Sept. 25, at St. Mary Church here for Father Benjamin Burnet Reese, 57, a priest of the Diocese of Peoria who for the last two years inspired many as he prayerfully coped with the effects of ALS.

Father Reese was diagnosed with bulbar onset amyotrophic lateral sclerosis (ALS), also known as Lou Gehrig’s disease, in July of 2013. His disease would affect the part of his brain that controls speech and mouth movement and he soon lost his ability to speak. He continued to minister as long as he could, using an iPad to communicate with others.

When the Ice Bucket Challenge drew attention to ALS in the summer of 2014, Father Reese — who retired that July because difficulties in swallowing led to deteriorating health — was the focus of much fundraising. He asked that any donations in his name be made to organizations such as the John Paul II Medical Research Institute in Iowa City, which works only with adult stem cells in their research efforts toward neurological diseases including ALS.

“Whenever I feel discouraged, I say ‘Jesus, I trust in thee,’ or the words of Padre Pio: ‘Pray, hope and don’t worry,'” said Father Reese in a story published in The Catholic Post last August.

—–
From the 2014 archives: Silenced by ALS, Father Reese still has a powerful message
—–

FORMER PASTOR IN GALVA, WOODHULL, PEORIA
Born in Granite City on Sept. 15, 1958 to John and Beverly Reese and raised in Aspen, he earned a bachelor’s degree in English literature from Georgetown University in Washington, D.C. He later studied philosophy and theology at St. Thomas Seminary in Denver, Colorado, and theology at Louvain University in Belgium. Father Reese also attended Pontifical Irish College in Rome and had a licentiate degree in theology from the Pope John Paul II Institute for Marriage and Family, Washington, D.C.

He was ordained to the priesthood on May 25, 1991, by Bishop John J. Myers at St. Mary’s Cathedral in Peoria.

Father Reese’s first assignments were one year each as parochial vicar at St. Pius X, Rock Island, and Holy Family, Lincoln. In 1993, he was named pastor of St. John, Woodhull, and St. John, Galva.

In 1996, Father Reese was released for service in the Diocese of Rapid City, South Dakota, then in a sister diocese relationship with the Diocese of Peoria. Upon his return in 1998, he was named pastor of St. Mark Parish, Peoria, where he served for eight years. Father Reese was also vicar of the Peoria Southeast vicariate from 1998 to 2001.

He was released for doctrinal studies in 2006, and became associate pastor of St. Thomas More in Chicago in 2010. The following year, he became co-pastor of Our Lady of Mount Carmel and St. Therese of Lisieux parishes in Kenosha, Wisconsin, where he served until taking medical leave in 2014.

Father Dwight Campbell, also a priest of the Diocese of Peoria who served at the Kenosha parishes with Father Reese — both are members of a diocesan society called the Apostles of Jesus Christ, Priest and Victim — said Father Reese showed “heroic perseverance and abandonment to God” during his battle with ALS.

He is survived by his parents; five siblings, Mary, Jeff, Anise, Christi, and Devon; eight grandnephews, and two grandnieces. One sibling, Walter, preceded him in death.

EDITOR’S NOTE: Plans for a memorial Mass for Father Reese in the Diocese of Peoria were being considered as The Catholic Post went to press on Tuesday. We will update this obituary when plans are confirmed.