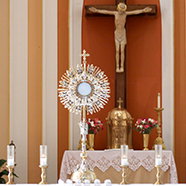 Photo Caption: Margarita Nambo hopes many will accept the invitation to come to St. Hyacinth Church in LaSalle and spend time with Jesus, who is “alive, in person, in the Eucharist and waiting for everyone.”

LASALLE — Saying the Hispanic community here raised enough money in only three months to buy a stunning new monstrance for eucharistic adoration at St. Hyacinth Church would be worthy of mention in its own right. To leave it there would be to miss the point of this story, however.

“The church is open for you and Jesus is waiting for you. He is alive, in person, in the Eucharist and waiting for everyone,” said Margarita Nambo, whose dream of a beautiful home for Jesus prompted the community to start the fundraising effort. “I want to promote this more and more and more.”

More comfortable speaking in Spanish, Nambo’s words were interpreted by Father Antonio Dittmer, pastor of the LaSalle Catholic parishes. With his help she urged people not to be concerned about the problems they might have had in their life.

“Don’t worry if you’ve never been to the church or you’ve been far from the church,” she said. “He’s waiting for you. Come.”

A DREAM SHARED
The desire to provide a worthy dwelling for Jesus grew out of her experience of eucharistic adoration at St. Hyacinth.

On Tuesday, Wednesday and Thursday, the Eucharist is exposed from 9 a.m. to 9 p.m., but the monstrance — a vessel used to display the consecrated host — was too small for such a large worship space. It was being placed on a box to make it easier to see.

One night she had a dream that Father Dittmer returned from a retreat in Mexico with a large box and placed it on the altar. He pushed a button three times with mountains rising from the box first, then Our Lady of Guadalupe, and finally a beautiful monstrance.

Nambo took her dream to Father Dittmer, who said, “I thought of this, too, but it costs too much money.” When she asked for permission to raise the funds, he readily granted it.

She secured the backing of the parish’s Spanish-speaking Legion of Mary and talked to the people at large. Homemade tamales, seafood tostadas and a variety of other Mexican appetizers were sold after Mass, and people gave her donations outright when they heard why the money was needed.

Some didn’t know what a monstrance was and why it was so important, so she used the opportunity to do some evangelizing.

There was no specific monetary goal in mind. “We put that in God’s hands,” Father Dittmer said.

“A LOT OF HEART”
He did, in fact, go to Mexico for a retreat in early June and Nambo asked him to look for the monstrance she had seen in her dream: rays of the sun flowing from the Eucharist, with a cross on top and angels supporting the whole thing.
Now the housekeeper for Father Dittmer and Father Paul Carlson, parochial vicar, Nambo acknowledged that there had been troubled times in her own life.
In the darker moments, it was the sun rising that had been a symbol of God’s love and hope for her.

Father Dittmer had just one morning free on his retreat, but that was all he needed.

“I walked into the religious goods store in Mexico and this was the first thing on the counter. It was staring at me,” he said, displaying the photo of the monstrance he took with his phone. Standing 4 feet tall, it was exactly what she had described to him.

He texted the photo to Nambo and received a simple reply: “Comprarla.” (“Buy it.”)

“It is something that God wanted because he touched the hearts of people in our community, who worked very hard,” Nambo said. “As we always say in the Hispanic community, it’s not that we have a lot of money, but we have a lot of heart. We know how to cook. Through all of that and the good will, it came through.”

On the first Friday of each month, there is a Spanish Mass at 6 p.m. at St. Hyacinth Church. In July, parishioners asked their pastor if they could have adoration from Thursday night until the Mass on Friday and it was such a success that they will do it every month from now on.

“I’m still stunned,” Father Dittmer said of what Nambo and the community accomplished in a relatively short time. “That’s a lot of money. That’s a lot of work. But it’s their faith. They made it happen.”