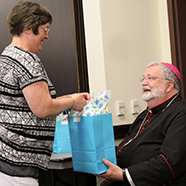 Photo Caption: Retiring principal Mary Paula Schmitt receives a token of appreciation and an expression of gratitude for her years of service at St. Louis School in Princeton from Bishop Jenky.

After a long year of meeting over conference tables to map out the future for their schools, pastors and principals from around the Diocese of Peoria recently met around the table of the Lord for a closing Mass in the Our Lady of Perpetual Help Chapel of the Spalding Renewal Center in Peoria.

Following the liturgy, they were treated to brunch by the diocesan Office of Catholic Schools. The celebration included expressions of gratitude for those who are retiring, recognition for milestone anniversaries, and a special thank you to Bishop Daniel R. Jenky, CSC.

In his homily, Bishop Jenky said the Apostles were able to go to the ends of the earth and face death fearlessly because they had met Christ, “who truly died on the cross and truly rose from the grave.” In eating and drinking with him, they became new people.

“That great message of the resurrection is something all of you as leaders in our schools, all of my brother priests, have to carry with us and that has to inform everything we say and do,” the bishop told them. “We do bring hope into this sometimes difficult world. We bring resurrection into the dead ends we all face from time to time.”

At the end of Mass, he wished them “a time of tranquility and peace” from all the good work they do and assured them of his prayers. “We are endlessly grateful for your ministry,” Bishop Jenky said.

LOOKING TO THE FUTURE
At brunch, the principals were encouraged to identify the lead teachers in their schools for possible enrollment in the Mary Ann Remick Leadership Program, part of the Alliance for Catholic Education at the University of Notre Dame. Speaker Dan Faas, admissions coordinator, said the program uses a community model not only to equip the leaders with the professional skills they need, but to give them a solid spiritual foundation.

“We believe that school leaders are the spiritual leaders of the school,” he explained.

Dr. Sharon Weiss, superintendent of Catholic schools for the Diocese of Peoria, told The Catholic Post that Faas had recommended taking the next year to identify and form a cohort of candidates for the program and beginning the following year. The goal, she said, is “growing our own” principals.

“We’ve got to start looking to the future,” she said.

In another presentation, Bill Engelbrecht, director of advancement for the Diocese of Peoria, talked about new and important ways diocesan schools could go about “Sharing Our Story.” This is another piece of “Faith in Our Future,” a major initiative launched by the Office of Catholic Schools with the bishop’s direction and support, Weiss said.

“You work so hard on Catholic identity and you do a great job,” Engelbrecht said. “Your academics are outstanding and the religion and faith are being taught.”

By “Sharing Our Story” about those successes, “we have a chance to make the schools of the Diocese of Peoria much, much stronger and more children will become the beneficiaries of a wonderful Catholic education,” he said.

LEADERS RECOGNIZED
Two priests who have been granted senior status were honored for their role as Catholic school pastors.

Weiss praised Msgr. John Prendergast, former pastor of St. Patrick in Washington, for his ministry of presence to the students. Not only was he there in the sacramental moments of their lives, she said, but he made it a point to greet them when they arrived in the morning.

Maureen Bentley, principal of St. Thomas the Apostle School in Peoria Heights, called Msgr. William Watson, pastor, her “support network” and “cheerleader” and said he is someone she admires for his wisdom, his leadership, his tremendous faith and “his passion for supporting Catholic education.”

Father Mark DeSutter of Sacred Heart in Moline was recognized for 15 years, while Father Joseph Dondanville of St. Mary in Kickapoo and Father Michael Pakula of St. Malachy in Geneseo were honored for 20 and 25 years of service, respectively.

Anita Kobilsek, principal of Holy Cross in Mendota, earned a round of applause for giving 30 years to Catholic education — 15 of them as principal.
Weiss also thanked Msgr. Richard Pricco, pastor of St. Paul in Macomb, for his 53 years of priestly service.

The principals didn’t forget Bishop Jenky. Each of them presented gifts and cards of appreciation made by their students in thanksgiving for his support of Catholic education.