Msgr. Prendergast is grateful for ‘a vocation within a vocation’ 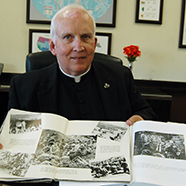 Photo Caption: Msgr. John Prendergast holds a magazine showing military chaplains in action in his right hand and a book of chaplain history picturing him celebrating Mass for troops in Panama in the other.

When Msgr. John J. Prendergast was in third grade, he saw a photograph of a priest saying Mass for soldiers in a Catholic magazine called Treasure Chest.

“From the very earliest time, that’s what I wanted to do,” said Msgr. Prendergast, now nearing age 70.

Mission accomplished, and then some, with God clearing the way.

“I was able to have what some call a ‘vocation within a vocation,'” said Msgr. Prendergast, who will be granted senior status next month after a 39-year priestly career that included 22 years serving soldiers and their families as a highly decorated, paratrooping U.S. Army chaplain.

Yes, he used to jump out of airplanes.

Fifty-five times, in fact, including once into a combat zone — in 1989 from just 500 feet with the First Brigade of the 82nd Airborne Division during Operation Just Cause in Panama. A photo of Msgr. Prendergast celebrating Mass with those troops is published in a book recording the history of U.S. Army chaplains.

While his vocation began with a magazine photo, Msgr. Prendergast’s life story reads like a movie script.

ORDAINED ON FOURTH OF JULY
The Streator native and future military chaplain was ordained on the Fourth of July — and not any Independence Day, but July 4, 1976, the nation’s bicentennial. As the Mass ended, church bells across the nation were ringing in unison to celebrate the 200th birthday of the United States.

Further, the ordination took place in his home church of Immaculate Conception, Streator, a rarity caused by final exams at his seminary studies in Rome taking place later than those of classmates in the U.S.

As a good movie storyline would have it, when Msgr. Prendergast returned to parish work after retiring from the U.S. Army with the rank of colonel in 2002, he was assigned as pastor of his home parish in Streator. He would soon be given the formidable task of guiding the consolidation of four Streator parishes into one , which was given the historical name of St. Michael the Archangel. Msgr. Prendergast would be its founding pastor.

CREDITS MANY “PROPHETS”
Movies have supporting actors, and Msgr. Prendergast’s life story is dotted with what he refers to as God’s prophets. A favorite quote is a variation of Hebrews 1:1: “God works in many and diverse ways through his prophets.”

For Msgr. Prendergast, the supporting role list includes a Baptist sergeant, a bishop who changed his mind, and even Blessed Mother Teresa.

After graduating from Streator High School in 1963, Msgr. Prendergast enlisted in the U.S. Air Force and for four years served as a chaplain’s assistant at Lackland Air Force Base, where soldiers trained for combat in Vietnam. He spent an additional two years with the Air Force Reserve.

At the end of his enlistment, he had the opportunity to go to a preparatory school for the Air Force Academy. But Sergeant Guy Lankford, a Baptist who had observed his work with the chaplains, said “Jackie, you should go to the seminary. You’d be happier as a priest.”

Msgr. Prendergast was accepted into the seminary program for the Diocese of Peoria, but only after promising to Bishop Edward W. O’Rourke — who was worried about training then losing a young priest — that he would not ask to return to the military. He earned a sacred theology degree from Pontifical Gregorian University in Rome and completed a year of advanced study in moral theology at the Pontifical Institute of St. Alphonsus, also in Rome.

While in Rome, the Missionaries of Charity tried to recruit him to be spiritual director for their house of formation there. Msgr. Prendergast told their founder, Mother Teresa, that his bishop would not allow him to stay and suggested she write him a letter.

His first assignments in the diocese were as parochial vicar of St. Matthew Parish and assistant chaplain at St. John’s Catholic Chapel, both in Champaign. But four years after ordination, when it was pointed out to Bishop O’Rourke that the diocese had no priest serving the military, the obvious choice was young Father Prendergast. Bishop O’Rourke appointed him a U.S. Army chaplain in 1980 with the instruction to “stay until you make colonel.”

There would be many personal accolades, including the Master Parachutist Badge with one Combat Star (for the Panama jump). In 2000, he was promoted to colonel and also named a prelate of honor with the title of monsignor by Pope John Paul II. And upon retirement from the Army two years later, he received the Legion of Merit, one of the highest awards for military service.

But what gave Msgr. Prendergast the most joy and satisfaction during his priesthood was not being in a lead role, but a supporting one — supporting God’s desire to be present to soldiers and others in need, whether it be bringing the Eucharist to one soldier in the jungle or hearing the confession of someone in Streator.

“I had some very prominent positions in combat units, big jobs. But they’re basically still one person at a time, one soul at a time,” he told The Catholic Post. “I was privileged to do that.”

He teared up briefly as he told of being asked to preside at the funerals of soldiers killed in action because they had put his name in a book of preferences before going out on a mission. On Aug. 1, he will be chaplain at Arlington National Cemetery for the interment of General Hank Emerson, a decorated Vietnam war hero, because the general — who died in February — had requested it in his will.

When he moves to an apartment in the Buehler Home Retirement Community next month, Msgr. Prendergast says he will carry many memories but just one memento — a small statue of a paratrooper given to him by soldiers of the 82nd Airborne division that capsulizes his “vocation within a vocation.”

“They debated what to put on it,” he recalled. “Chaplain? Paratrooper priest? They finally worded it ‘A Paratrooper of a Priest,’ to emphasize both the same.”

RETURN TO PARISH LIFE
Msgr. Prendergast feels his military training, especially in persistence, was beneficial as he led Streator Catholics through the lengthy and sometimes contentious consolidation process — one of the first goals of a diocese-wide pastoral planning initiative.

“It’s almost embedded in training that when you are given a task, you do it and you follow through until it’s done,” he said.

From 2002 until St. Michael the Archangel Parish formed in 2010, he was pastor or administrator at various times of Immaculate Conception, St. Stephen, St. Casimir, and St. Anthony parishes in Streator as well as for a brief time at St. Patrick, Ransom.

The ending of the movie hasn’t been scripted yet.

“I’ll continue to be a priest,” said Msgr. Prendergast of his retirement. “But now I can spend more time on my own spiritual journey.”

Persons wishing to send well-wishes to Msgr. Prendergast may write to him in care of the Spalding Pastoral Center, 419 N.E. Madison Ave., Peoria, IL 61603.