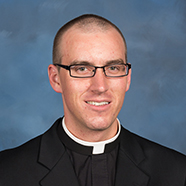 When Deacon Joseph Baker went to the University of Illinois to study psychology and economics, he also had a desire to take his Catholic faith more seriously.

He walked away with a bachelor’s degree in 2008 and the knowledge that it is possible to have fun devoting your life to the church, no matter what your vocation is.

“College was the best time of my life, but for completely different reasons than people usually give,” he told The Catholic Post. “I found so much joy and fun in learning about and coming to embrace the Catholic life.”

In addition to getting involved in activities at the Newman Center, such as the Fellowship of Catholic University Students and the Koinonia retreat experience, Deacon Baker credits the Prelature of Opus Dei for helping to form him in a way that allowed him to consider the priesthood later.

“It was maybe the first time in my life that I was introduced to a heightened, intellectual understanding of the church, like there’s something real here,” he said of Opus Dei. “My involvement in the Newman Center strengthened that in me. There’s something of depth here, of substance . . . to be lived personally, on a daily basis.”

At about that time, Msgr. Brian Brownsey started visiting campus. Not only was he rector at St. Mary’s Cathedral in Peoria, where Deacon Baker’s family had been attending Mass, but he was the director of the Office of Priestly Vocations.
Through their interaction, Deacon Baker learned about Emmaus Days, a retreat designed to help young men learn how to listen for God’s will in their lives.

“I remember very clearly kneeling there at Nazareth House in the chapel and thinking about all the talks about priesthood and priestly life, vocations,” Deacon Baker said. “I just thought, maybe I can do this.”

While the morning light brought a sense of shock — “I had never thought about this before” — “slowly, it was placed back on my heart and I eventually came to embrace it,” he said.

During his breaks from the seminary, he has assisted at St. Mary in Kickapoo, Historic St. Patrick in Bloomington, Holy Family in Oglesby, and been involved in Hispanic ministry in Peoria. Last summer he served at Immaculate Conception in Monmouth, St. Patrick in Raritan, and St. Theresa in Alexis.

At Mount St. Mary his favorite assignment was prison ministry at a correctional center in Maryland.

“It changed my whole view of so many things — the human condition, how weak we all are, how susceptible we all are, and how wrong we can be in judging others,” Deacon Baker said. “I think there are people who commit crimes and in the process of doing that they are criminals. But as far as labeling someone for their life as a criminal, they’re children of God who are trying to do their best, hopefully.”

Deacon Baker said one of the ways he hears God speaking to him is in the joy he feels when he’s involved in ministry.

“I’m excited to be able to do that full time — being with the people of God, to be able to share the church with them, share my faith, for them to share their faith with me,” he said. “That’s something that always uplifts me on the weekends I get to go to my assignment and other assignments I’ve had over the years. I’m excited about that for sure.”