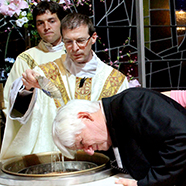 ROCK ISLAND — For 39 years, Chuck Gibbs often went to Mass with his wife, Karen, and their six children, even though he wasn’t Catholic. The one thing he really missed was being able to receive Communion.

“It always made me feel like an outsider by not being able to participate in that part of the church,” he told The Catholic Post during Holy Week.

That’s not an issue anymore.

Gibbs was baptized and confirmed and received the Eucharist for the first time at the Easter Vigil at St. Pius X Church here. Serving as his godparent and sponsor was Karen.

“It was everything it was trumped up to be. It was great,” Gibbs said at the reception in Farrell Hall after the liturgy. “It was the final hurrah for becoming a member of the family.”

Gibbs was one of eight people received into the Catholic Church at St. Pius X, and was among nearly 200 men, women and children celebrating the Easter sacraments at parishes around the Diocese of Peoria last Saturday night.

For his confirmation name, Gibbs turned to St. Michael the Archangel. It was a natural choice, he said.

“I was in the Army (in Vietnam) and I was a paratrooper. St. Michael is the patron saint of paratroopers,” he explained.

“TAKE THE JUMP”
Gibbs decided to make a leap of faith two years ago, but it was too late in the RCIA process at St. Pius X for him to start then. When sessions began last fall, he was there.

“I had been coming to church with Karen for 39 years — not every Sunday. I worked a lot of odd shifts. But I always made sure I was there on holidays.”
When he retired in 2010, he tried to get to Mass more often. When Karen skipped Mass one Sunday he asked her why.

“I don’t enjoy going by myself,” she told him.

“A bell went off,” he said. “I thought I should investigate.”

He had attended a Baptist church as a child, but described his experience as “hit and miss.” “I was not brought up to go to church regularly on Sunday.”

Once Gibbs started to attend the RCIA sessions with Karen, he realized how much he missed by not being part of the family of faith at St. Pius X with his wife and children.

“This has made Karen and me even closer,” he said.

At the Easter Vigil, it was Karen’s hand on his shoulder as he leaned over the font to be baptized. It was there again when Msgr. Mark Merdian anointed Gibbs’ head with sacred Chrism during confirmation.

While Karen is not retired yet, Gibbs said they have talked about getting involved in mission trips and other service opportunities when she does.
“The kindness and the way they take care of the poor — how much focus is put on that — it’s heartwarming,” he said of the St. Pius X parishioners. “You don’t always see that from the outside.”

The process of preparing for the sacraments of baptism, confirmation and Eucharist was a “great experience” that he would recommend to others.