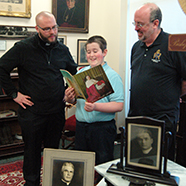 The Spalding Pastoral Center in Peoria now has a rectory.

“The St. John Vianney Rectory” is the title of a new display at The Museums of the Diocese of Peoria. It is filled with the stories of more than a dozen legendary priests who have served here, as well as fascinating pieces of diocesan history at every turn.

“This is all about priests, to encourage people to pray for priests and learn more about them,” said Sister Lea Stefancova, FSJB, diocesan archivist.

To that end, she and fellow archivist Sister Ann Gill, FSJB, have turned the museum’s rotating display room into a series of rectory suites.

There is a “missionary suite,” where visitors can learn the stories of three heroic figures of early diocesan history — Father John G. Alleman, OP, who is the focus of a special year in Rock Island for his ministry in that region more than 150 years ago; Father John Blaise Raho, CM, who once cared for 48 missions from LaSalle to St. Louis; and Father Joseph Costa, IC, missionary to the Galesburg region.

Other rectory rooms, divided by information panels, include a bishop’s parlor, an Irish suite, and the rectory office. The office includes the desk of the most modern priest “residing” in the museum rectory, the late Msgr. James F. Campbell, “a priest’s priest” who served as vicar general to Bishop John J. Myers.

STORIES REVEAL SACRIFICES
“Seeing the stories of the individual priests, it really opens up your eyes,” said Sister Lea. “To see what they went through, what their life was about, their dedication — it’s quite amazing, really.

“Our diocese did not just appear from nowhere,” she added, noting the hard work and sacrifices of our forbearers.

When the archivists decided to honor the priests who have served this diocese, they took on a formidable task: how to select a few from the thousands of priests in our history, including many well-known for their accomplishments and holiness?

“These are randomly picked” and not intended to be a “best” list, said Sister Lea. “Even though we have on display 12 priests, it really includes all the priests.”

— Bishop Gerald T. Bergan, a diocesan priest who became Bishop of Omaha. His appointment was announced on the first front page of the Diocese of Peoria’s new newspaper, then called The Register, on April 1, 1934. That historic front page, now tattered on the edges, is preserved in a glass frame.

— Bishop Peter J. O’Reilly, the diocese’s first and only auxiliary bishop. His display includes a copy of a handwritten letter by Archbishop John Lancaster Spalding in 1900 requesting his appointment to the position.

— Msgr. Maurice Sammon, the long-serving pastor of St. Bernard Parish in Peoria considered the “mayor of the East Bluff.”

— Father Edward J. Schuetz, a former chancellor who was killed in a car accident near Princeville while accompanying Bishop Edmund Dunne to a confirmation .

— Father John Cannon and Father John A. O’Brien, who were instrumental in the establishment of campus ministry at the University of Illinois, and

— Father Michael Hurley, who was selected to be first Bishop of Peoria but turned down the appointment.

ORAL HISTORIES ON VIDEO
Museum displays often showcase artifacts, and this one has plenty of treasures. Upon entering “The Rectory,” visitors see a Roman Pontifical, or liturgical book, in a glass casing. The book was personalized for our founding bishop, Archbishop Spalding, at the time of his consecration in 1877.

“It’s falling apart, but it’s very beautiful and it’s something that goes to the very beginning of the diocese,” said Sister Lea.

There is a small wooden cross that belonged to French Jesuit missionary Father Jacques Gravier, who built the chapel to the Immaculate Conception that would eventually become St. Mary’s Cathedral. Other artifacts include a sick call set from ages past and even relics of St. John Vianney and St. Therese of the Child Jesus, patroness of vocations.

But perhaps the most popular treasure in the collection will be video interviews with three beloved priests who died in recent years: Msgr. Raymond Boyle, Msgr. Don Fitzpatrick, and Father John Dietzen. The videos were produced by Father Jacob Rose when he was a seminarian as a way to gather the oral histories of the senior priests.

“Father Rose was so proud of it, and we were so happy he was doing it,” said Sister Lea.

“The St. John Vianney Rectory” will welcome visitors for the remainder of 2015 at the Spalding Pastoral Center, 419 N.E. Madison Avenue. For more information, call (309) 671-1550 or visit CDOPMuseums.org.