Consecrated Life Series: The Sisters of Mary of the Presentation 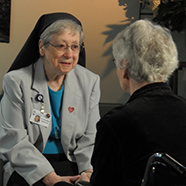 Photo Caption: Sister Celine Marie Morth, SMP, offers a listening ear to a resident in one of the care centers administered by the Sisters of Mary of the Presentation.

EDITOR’S NOTE: This is the fifth in a series featuring religious communities and other forms of consecrated life around the Diocese of Peoria in honor of the Year of Consecrated Life. Called by Pope Francis, the celebration will run through Feb. 2, 2016, the World Day of Consecrated Life.

Between the years of 1790 and 1800, France was in the turmoil of a revolution that included the Reign of Terror (1793-94). Most priests, who would not take the oath of accepting the new government, were either put to death or had to go into exile.

Father Joachim Fleury, the founder of the Sisters of Mary of the Presentation, was ordained in 1786 at the age of 24 and served as an assistant until 1792, when he had to make the choice of the oath, death or exile. Along with many other priests, he chose exile to the island of Jersey in the English Channel. Here he spent eight years engaged in manual labor, prayer, study and writing, keeping alive his priestly zeal with other priests.

Father Fleury was able to return to France in 1799 and in 1817 he became the pastor in Broons. Much needed to be done to restore the ruins of the church, statues and shrines, but the people needed the most work. He had a mission with 20 priests to instruct the people in faith and doctrine and to preside over the sacramental life of the church, giving spiritual direction and enlivening the faith of the people.

Father Fleury wanted to keep this restored practice of the faith alive and it was from this desire that a new congregation was born. He consulted a faith-filled family of his parish and asked for their two eldest daughters to work with him. He had them educated and their family home became the first school for girls. They went out to care for the sick and the elderly of the parish.

WISDOM AND COURAGE
The Le Marchands not only gave their two daughters to Father Fleury’s vision, but they became the founders of the congregation with him. The twofold orientation was to respond to the needs of the local church, particularly the poor, and to live fully all the demands of consecrated religious life. Louise became Mother St. Louis and Laurence was known as Mother St. Joachim.

In 1897, the government enacted anti-religious laws and the Sisters had to leave the elementary schools and be replaced by lay teachers. Four years later, religious orders involved in teaching were abolished and no longer had the right to exist officially. Forced to seek refuge in other lands, they came to the United States, Canada and Belgium.

It was in 1903 that the Sisters of Mary of the Presentation were invited to Spring Valley to begin a hospital to care for the miners of Cherry. The community still ministers in health care through St. Margaret’s Health, providing inpatient, outpatient, hospice and home health care, and in its many clinics.

The Sisters would go on to serve the people of central Illinois at St. Patrick School in Washington and St. Louis School in Princeton. The congregation in France continued to suffer, however.

In 1904, the government ordered the removal of all crucifixes from courtrooms, hospitals and public buildings, and the Sisters were no longer allowed to wear them. Soon they were forbidden to care for the sick. The president of the French Republic signed a decree of dissolution on Jan. 31, 1914, and the Sisters were evicted from their motherhouse.

Shortly after, World War I broke out and Mother Therese of Jesus offered the services of the Sisters to care for the wounded and the sick. It was through this wisdom and courage that the Sisters were able to get the motherhouse back after the war. On Nov. 29, 1923, a telegram informed them that the decree of dissolution had been revoked.

The congregation became a pontifical institute in 1958, the same year a mission in Cameroon was established. A formation center was established there and many women have professed their vows and serve in diocesan schools, parishes, hospitals, clinics and prisons. Currently there are about 30 Sisters in Cameroon.

DEEP GRATITUDE
The main ministry of the Sisters of Mary of the Presentation in the United States is health care. The SMP Health System includes medical centers, care centers and clinics in North Dakota and Illinois, promoting respect for all life from the moment of conception to the moment of death.

Other ministries are in the areas of spirituality, education, parish ministry and pastoral care in our nursing homes and homes of the most vulnerable through hospice and home health.

Mary is our patron and model of virtue. We celebrate her feast each year on Nov. 21, the Presentation of Mary in the Temple, and renew our consecration to God. The second patron of our congregation is St. Vincent de Paul, who inspires us with a deep commitment to charity and service to the poor and most vulnerable in our midst.

The Sisters of Mary of the Presentation live their consecration through a life of prayer, community and service to all who come to us for care. We join hands with our lay employees, who live out this charism by living the mission to be the presence of Jesus and creating a climate of healing in the work place. We also have an associate relationship with many lay people who live the charism in the midst of their daily lives and ministry.

SISTER ANNE Germaine Picard, SMP, lives in Princeton and is vocation director for the Sisters of Mary of the Presentation.

Sisters of Mary of the Presentation
Princeton

FOUNDED: Aug. 25, 1828, in Broons, France
FOUNDERS: Father Joachim Fleury and Louise and Laurence Le Marchand
PROVINCIAL: Sister Suzanne Stahl, SMP
MEMBERS: Two serving in the Diocese of Peoria; 26 in the United States
CHARISM: The Sisters of Mary of the Presentation are “called to be the presence of Jesus.” Inspired by Mary’s faith and availability, the Sisters accept this challenge as they reach out and touch other’s lives. Simplicity and hospitality also are key components of their consecrated life.
APOSTOLATES: Health care is their main ministry. The Sisters also serve in the areas of spirituality, education, parish ministry, pastoral care, and prayer.