Prayer is a continuing mission for diocese’s ‘retired’ Religious 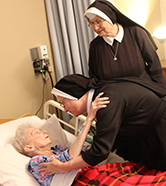 LACON — Sometimes Sister M. Alphonse Husak, DSF, sits in the chapel of St. Joseph’s Nursing Home here with the lights off. At 93, memory has become an issue, but she hasn’t forgotten who is in the tabernacle and why she’s there.

“I can see she’s in prayer. It shows me our spiritual life is not something that is affected by dementia,” she said. “The spiritual needs are there and the growth they can have is still there. The prayer life stays intact.”

“This is their mission,” Sister M. Loretta Matas, DSF, regional superior, told The Catholic Post. “They pray for the people God entrusted to us here.”

Sister Alphonse is one of the senior members of the Daughters of St. Francis of Assisi in Lacon who benefit from the Retirement Fund for Religious. The annual collection will be received in parishes around the Diocese of Peoria the weekend of Dec. 12-13.

Now in its 28th year, the appeal is coordinated by the National Religious Retirement Office (NRRO). It offers support for about 33,000 Catholic Sisters, Brothers and religious order priests, age 70 or older, whose communities do not have sufficient retirement funding.

The Diocese of Peoria contributed $124,469.54 to the 2014 collection, which raised $28.3 million. That made it possible for the NRRO to distribute more than $25 million in monetary support to 395 religious communities.

In addition to the Daughters of St. Francis of Assisi, the Retirement Fund for Religious assists the Benedictine monks of St. Bede Abbey in Peru. The collection also benefits members of religious communities that are not based in central Illinois but have members serving here. Among them are the Conventual Franciscans of St. Bonaventure Province, who staff Holy Family in Peoria, and St. Mary in Wenona, St. John the Baptist in Lostant, St. Patrick in Minonk, and St. Ann in Toluca.

SACRIFICES APPRECIATED
“As we all know, health care costs have gone through the roof, so the collection helps us meet the needs of our senior friars,” Father Michael Zielke, OFM Conv., provincial minister, told The Post.

“Our friars have worked very hard in serving God’s people. For us to help them in their senior years, providing them a safe, clean, loving and living environment shows how much we have appreciated their sacrifices in their years of active ministry,” he explained. “Even now our senior friars who are limited in active ministry pray daily for us. They have taken on the ministry of prayer, praying for all God’s people and His world.”

“Prayer is amazing at this stage of life,” Sister Michael said. “It’s such a witness and a testimony to God’s goodness. He’s there and he’s not limited by our memories. That doesn’t limit God. This is what we need to remember and recognize and support in our elderly Sisters.”

Sister Loretta said that at the time Sisters like Sister Alphonse, Sister M. Cornelia Blasko and Sister M. Olga Poluch traveled from Slovakia to establish the American Province of the Daughters of St. Francis of Assisi, they didn’t pay into Social Security or even receive much in terms of a paycheck. That didn’t stop them from starting and serving as administrators, pastoral care workers, nurses and activity directors at places like St. Joseph’s Nursing Home in Lacon.

At 75, Sister M. Justina Delonga, DSF, continues to volunteer at St. Joseph’s, offering hugs, prayer and smiles to the 74 residents there. She also takes meals to eight or 10 members of the Lacon community on Fridays, supplying nourishment for their spirits as well as their bodies.

“As they have provided us with a lifetime of service, we want to return their offering with a moment of thanks,” Bishop Daniel R. Jenky, CSC, writes in a letter that will be read at Masses this weekend. Asking the faithful for their continued generosity, he said, “we hope to continue to provide for their many needs.”