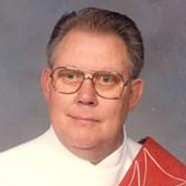 A funeral Mass will be offered at 10 a.m. on Friday, Aug. 22, at St. Ann Church in Peoria for Deacon Joseph F. Koeppel, a permanent deacon who served the parish for many years.

Deacon Koeppel died on Saturday, Aug. 16, 2014 at UnityPoint Health-Methodist Medical Center in Peoria. He was 78.

Burial will be in St. Mary’s Cemetery in West Peoria.

He was preceded in death by his parents and one brother, Roland.

Deacon Koeppel served in the U.S. Naval Reserve from 1955 to 1963. He was a master carpenter for 20 years, working out of Local 183. He also worked at Keystone and then was an inspector for the City of Peoria for more than 25 years, retiring in 1989.

A lifelong member of St. Ann Parish in Peoria and its predecessor, St. Boniface, Deacon Koeppel was a member of the Diocese of Peoria’s fifth class of permanent deacons. Following four years of study and pastoral training, he was ordained by Bishop John J. Myers on May 9, 1992.

He served as spiritual director for the WATCH (We Are The Church) Program at St. Ann, was active in Cursillo, and taught CCD. He was granted senior status in 2009.

A sports enthusiast, Deacon Koeppel coached Little League when his children were young, was active in Peoria area golf leagues and bowled in the Peoria Brothers Tournament. He took pride in being a member of Alcoholics Anonymous for 44 years.

Memorials may be made to St. Ann Church.