Five from Bloomington-Normal have college missions in FOCUS 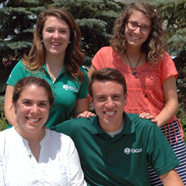 BLOOMINGTON — Four Central Catholic High School graduates, fresh from earning college degrees this spring, met at a Starbucks here in early August to talk excitedly about their lives’ next chapters.

The chapters have the same rare heading: Catholic missionary.

Joey Gruenwald, Zoe Myers, and Emma Schopp — members of Central Catholic’s Class of 2010 — and Annie Rondone, who graduated the following year, are all putting careers on hold to commit at least two years to proclaiming Christ on college campuses as missionaries with the Fellowship of Catholic University Students (FOCUS).

But the 2014 Bloomington-Normal campus missionary connection runs even deeper. Joining the organization’s home office in Denver this fall to work with the FOCUS international program is Krystal Montesdeoca, a graduate of University High in Normal. A member of St. Mary Parish in Bloomington, Montesdeoca just earned a master’s degree from the University of Illinois.

“I really hope people are encouraged by five people from Bloomington-Normal who are Christian missionaries,” said Gruenwald. That so many have chosen this path “speaks volumes of this place (Bloomington-Normal) and the awesome Catholic community we have,” he told The Catholic Post.

The four Central Catholic graduates have just arrived at different college campus assignments. They will work with teams of three or four other FOCUS missionaries to build relationships with students and invite them to deeper faith through Bible studies, the sacraments, and mentoring.
Gruenwald, who just earned a theology degree from Benedictine College in Atchison, Kansas, will join the FOCUS team serving students at the University of Virginia in Charlottesville.

Myers, who majored in communications sciences and disorders and special education at Saint Louis University, is off to the University of Tulsa in Oklahoma.

And Rondone, who earned an advertising degree from the University of Illinois in just three years, was the first to arrive at her mission destination — Ball State University in Muncie, Indiana.

A PEER MINISTRY
“Our sole job is to be there for students, to be friends with them,” said Myers. “I get to do my two favorite things about college — hanging out with people and talking about Jesus.”

Myers emphasized that FOCUS — active on nearly 100 college campuses with 450 missionaries — is a peer ministry. While respecting the efforts of other established campus ministries such as Newman Centers, the young Catholic missionaries strive to “meet students where they are,” in dorm rooms, sporting and social events, and even bars.

“We’re able to meet students who aren’t comfortable walking into a Newman Center or a Catholic ministry on campus,” said Myers. “But they still need that encounter with Christ. They still need the Lord.”
For Gruenwald, Rondone, and Schopp, FOCUS was a major part of their own college experiences.

“It was huge for me,” said Gruenwald. While given a “really strong foundation” by Epiphany Parish and Central Catholic, it was through FOCUS at Benedictine that Gruenwald “really encountered evangelization.”

“Actually the first person I met at Benedictine turned out to be my future Bible study leader,” he said. “I got involved right from the get-go, and I loved it and stuck with it.”

Schopp joined a FOCUS Bible study at Benedictine because her older sister Maggie had led one in her senior year at the school and “growing up I copied her with everything.” She later struggled with her faith, including during a difficult transfer semester to Illinois State in her junior year. But then a FOCUS missionary pursued her friendship when she returned to Benedictine.

“The joy she had for the Gospel and the love she had for Jesus — I wanted that,” said Schopp.

Said Rondone of her FOCUS experience at the University of Illinois: “I don’t think I could have gone throughout college without this.”

DISCERNING THE CALL
On their different campuses, the Central Catholic grads gradually discerned that FOCUS ministry was in their future. Gruenwald recognized his call early. “I wanted to be like one of them,” he said of the FOCUS missionaries serving Benedictine College.

“Their job seemed so cool,” agreed Rondone. “They pray all the time. The thought was always in mind that I don’t know what they do, but I like their job.”

Schopp struggled with feelings that “I wasn’t good enough” to be a missionary. During adoration in her senior year, she discerned it was something she wanted to pursue, and when she got the phone call that she had been accepted, she cried tears of joy.

While FOCUS was not at Saint Louis University, Myers knew of it through friends and her sister. She took part in FOCUS student leader training the summer before her senior year and “left with so much peace about the future.”

All attended an intense, prayerful five-week training session earlier this summer at Ave Maria University in southwest Florida that included sessions led by Curtis Martin, the founder of FOCUS. Myers called it “wonderful and exhausting.”

“At the end of it, it was hard to recognize the person we were going in,” she said.

CENTRAL CATHOLIC BOND
Like all missionaries, these young Catholics are united by love for God and his church, the recognition of God’s love for others, and a zeal for souls. But the four from Central Catholic have another family bond.

“There are so many faithful people there who really care about the students,” said Myers.

Schopp pointed to the “genuine joy” of her theology teachers and former chaplain Father Patrick Henehan. “They were excited and you could tell they were in love with Jesus and that’s why they were there,” she said.

“Christ spoke to me in that community,” he said.

“That’s what I’m going to try to create at the University of Virginia,” he added, “a community of people and the faith-based relationships that make all the difference in the world.”

INVITATION TO PARTNER WITH A FOCUS MISSIONARY

No one goes into missionary work for the money. But part of the job of a missionary with the Fellowship of Catholic University Students is to ask for it.

“We fundraise 100 percent of our salary,” said Myers. “We can’t even go to a campus, much less stay, without the generosity of other people.”

In return for monthly support large or small from their mission partners, the missionaries pledge daily prayer and to keep them informed through newsletters and personal contacts.

“We’re not just blindly getting money from people,” said Joey Gruenwald. “We’re forming relationships with these people supporting us.”

With five missionaries from the same region, the task became more challenging.

“If there was just one of us, they would have been fully funded in a week,” said Gruenwald. “But the Lord’s making it happen.”

“God will provide,” agreed Myers. “God has provided us with a wonderful community that not only has the treasure to share, but the willingness to share.”

To learn more about how you can financially and prayerfully support the FOCUS missionaries from Bloomington-Normal, contact them at the following email addresses or phone numbers: