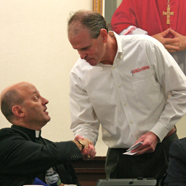 School choice, school recognition and defense of marriage issues were among the topics covered when the superintendents and associate superintendents of the six dioceses of Illinois met recently at the Spalding Pastoral Center in Peoria. Leading their discussion was Zachary Wichmann, director of government relations for the Catholic Conference of Illinois.

Wichmann also provided an update on the various bills monitored, supported or opposed by CCI during the spring legislative session.

Offering words of encouragement was Bishop Daniel R. Jenky, CSC, who dropped in to greet the school officials from the Archdiocese of Chicago and the Dioceses of Belleville, Joliet, Peoria, Rockford and Springfield.
Attending from the Diocese of Peoria were Dr. Sharon Weiss, superintendent; Jerry Sanderson and Dr. Susan Stolt, associate superintendents; and Bill Engelbrecht, director of advancement for the diocese.

“I think one of the biggest challenges we face running Catholic schools is a challenge of mission,” Bishop Jenky told them. “Increasingly we are the weird counterculture. We must be clear that we are not just a private school system — an alternate to the public schools — but we are Catholic from the tops of our heads to the tips of our toes.”

He also asked them to look at ways to get the parents involved in the parish as well as the school.

“I’m convinced if we ask more of parents to buy into what we’re doing it would energize our schools,” he said.

After lunch the school officials were invited to consider a stronger partnership with St. John’s Catholic Newman Center at the University of Illinois by Father Luke Spannagel, the new chaplain; Mike Hatfield, director of advancement; and Jennifer LaMontagne, director of marketing and communications. In addition to the invitation, the group from Champaign brought ice cream treats for dessert.

CHOICE AND RECOGNITION
Wichmann said the Catholic Conference of Illinois continues to work with Ed Choice Illinois, formerly called Freedom to Learn, and the Illinois Policy Institute on issues of school reform and school choice. While the coalition includes a wide range of organizations, the goal is to empower parents to make the best educational decisions for their children.

“If we could design the system all over, instead of giving money to the school districts we would give it to the parents to decide,” he told The Catholic Post. “It would improve the schools because they would be competing for students.”

Wichmann has been asked to serve on the policy committee for Ed Choice Illinois.

“In the next couple years here I think this is how we’re going to work on these matters of school choice in Springfield,” he explained to the school officials. “As I’ve said to you many times, we can’t do this on our own.”

The superintendents and associate superintendents spent a large portion of the meeting talking about school recognition, how many of their schools were visited in the last year, and how those visits went.

To be recognized by the state, schools must meet certain minimum standards for curriculum, personnel, and health and safety, among other things. It is important for religious schools to engage in the process to show that when students go from grade school to high school or from high school to college they know the same things their public school counterparts know, Wichmann told The Post.

This does not apply to religious instruction, which the state doesn’t recognize.

Paperwork is required each year and the schools are supposed to receive a visit every seven years, but religious schools got “off cycle” due to cutbacks in budget and staff on the state level. The school officials had an opportunity to discuss questions and concerns with Melina Wright and Ethelene Ferdinand of the Illinois State Board of Education during the meeting.

“Our goal is to seek and main recognition,” Wichmann said. One reason, among many, is that high schools can’t participate in Illinois High School Association sports if they aren’t recognized.

DEFENSE OF MARRIAGE
Marriage was redefined by law in Illinois last November and Wichmann said Catholic Conference officials have concluded that more work needs to be done to help Catholics understand the church’s teaching on marriage — particularly those 30 and younger.

Many teachers of religion avoided the issue because it was contentious, Wichmann said, and they feared saying the wrong thing.

The Catholic Conference’s Defense of Marriage Department is working on training so people will not only know what the church teaches, but also how to talk about it. The first program will take place in the Diocese of Rockford this fall.

“We’re not going to quit on this issue,” Wichmann said. “Politically it is what it is, but there is still a real need for education on this, particularly among out own people.”