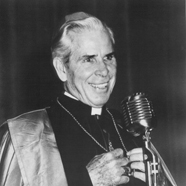 Photo Caption: Venerable Archbishop Fulton J. Sheen was a native of El Paso and was raised and ordained to the priesthood in Peoria.

A seven-member theological commission that advises the Congregation of the Causes of Saints at the Vatican has unanimously agreed that a reported miracle should be attributed to the intercession of Venerable Archbishop Fulton J. Sheen.

Bishop Daniel R. Jenky, CSC, who serves as president of the Archbishop Fulton J. Sheen Foundation, was notified of the approval on June 17. It marks another step toward the beatification of Archbishop Sheen, a priest of the Diocese of Peoria who became a radio and television pioneer, author, and orator.

The approval by the theologians followed a March 2014 vote by a team of Vatican medical experts who affirmed that they could find no natural explanation for the healing of a stillborn baby in September 2010. The case of James Fulton Engstrom of Goodfield, now fully recovered, has been documented on these pages many times.

The case will next be reviewed by the cardinals and bishops who advise the pope on such matters. Finally, the miracle would be presented to Pope Francis, who would then officially affirm that God performed a miracle through the intercession of Fulton Sheen. There is no timeline as to when the next steps might move forward.

Should Pope Francis validate the proposed miracle, Archbishop Sheen could then be declared “Blessed” in a ceremony that could be celebrated in Peoria, where he was raised and ordained to the priesthood. An additional miracle attributed to his intercession would be necessary for canonization, or declared sainthood.

For more information about Archbishop Sheen and the cause for his canonization, visit ArchbishopSheenCause.org.