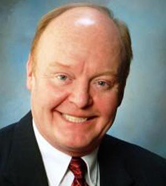 CHAMPAIGN — A funeral Mass was offered on Thursday, May 15, at St. Matthew Church here for Deacon Donald J. Fraley, 62, a permanent deacon for the parish since 2012.

Deacon Fraley died on Saturday, May 10, 2014 at the Champaign-Urbana Nursing and Rehabilitation Center.

Father Robert Rayson was principal celebrant of the funeral liturgy.

Born in Hoopeston on March 19, 1952 to Donald C. and Barbara Fraley, he was graduated from Hoopeston High School in 1970. He attended Danville Junior College, and earned a bachelor’s degree in psychology from Illinois State University.

Deacon Fraley worked in sales for four decades, including as a pharmaceutical representative. He later began a career as a real estate agent and broker for Coldwell Banker in Champaign.

On May 19, 2012, he was ordained a permanent deacon for the Diocese of Peoria by Bishop Daniel R. Jenky, CSC. The ordination rite capped a five-year selection, discernment and formation process for the 29 29 members of the diocese’s ninth class of permanent deacons.

Deacon Fraley is survived by one sister, Nancy (Gary) Cholwek, and a nephew, Christopher Cholwek, who reside in Washburn, Wis.

Memorial contributions may be made to St. Matthew Parish, Champaign.