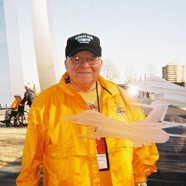 The 80-year-old pastor of Immaculate Heart of Mary Parish here felt the gratitude of the nation for his service in the Air Force during the Korean War when he accompanied 89 other veterans on an Honor Flight from the Quad Cities to Washington, D.C., on Wednesday, April 16.

“It was terrific, really phenomenal,” said Msgr. Pizzamiglio of a day that began with him leaving the rectory for Quad City International Airport at 4 a.m. and ended with his return home at midnight.

In between was a packed schedule, including visits to the various memorials honoring the sacrifices of military veterans, a surprise mail call on the flight home with personal notes of gratitude, and a welcoming crowd including many parishioners when the chartered plane touched down in Moline.

“We were treated with the utmost respect and honor by absolutely everyone,” said Msgr. Pizzamiglio, who began the Honor Flight application process two years ago. The donor-supported program gives top priority to World War II and Korean War veterans, offering a free trip to the nation’s capital accompanied by an appointed volunteer “guardian” who tends to their needs.

FROM AIR FORCE TO PRIESTHOOD
From 1952 to 1956, Msgr. Pizzamiglio — born in Chicago and raised in Spring Valley — was a crew chief maintaining F-86D jet fighter interceptors. Based in Texas, he would work with pilots before and after flights, making sure all equipment was functioning properly. It was pretty heady work for a 19-year-old.

“When I first looked into that cockpit I couldn’t imagine being able to learn that,” he told The Catholic Post. “But you do. They train you, you learn it, and the next thing you know you’re taxiing those million-dollar airplanes around.”

One night early in his final year of service, the young crew chief was in his room resting before roll call when an image came into his mind.

In the image, “I was vested as a priest and was holding up the sacred host at consecration,” Msgr. Pizzamiglio recalled. “I thought, ‘Oh my God, what’s this all about?’ That was the last thing I was ever going to think about. Priesthood? Who, me? I wanted to find a gal and get married and have children.”

But the image would return in the coming weeks. So Msgr. Pizzamiglio would go to the base chapel and pray about it. He eventually decided to pursue the priesthood after his honorable discharge — and reception of the National Defense and Good Conduct medals.

Msgr. Pizzamiglio enrolled at St. Bede Junior College and, after seminary studies, was ordained for the Diocese of Peoria on May 22, 1966.

He has served at many parishes in his 47 years of priesthood — including as pastor at parishes in Elkhart, DePue, and Chillicothe — and has spent the last 24 years guiding Immaculate Heart of Mary. He was named a Chaplain to His Holiness with the title of monsignor in 2009.

TWO-WAY GRATITUDE
Last Wednesday was Msgr. Pizzamiglio’s first glimpse of the Korean War Memorial, one of the nation’s newest memorials, dedicated in 1995.

“I was very impressed with the Korean memorial,” said Msgr. Pizzamiglio. The 19 stainless steel statues representing a squad on patrol were “very, very realistic,” he said.

Because Msgr. Pizzamiglio has gout flare-ups that could keep him from walking required distances, he opted for wheelchair assistance. Like the veterans from the various branches of service traveling with him, Msgr. Pizzamiglio wore a yellow shirt and jacket showing he was on an Honor Flight.

Wherever they went, group members — including eight veterans from Galesburg, and many from the Quad Cities region — were applauded and thanked for their service.

“Everything was so organized. We were constantly on the go,” he said, though he did have time to swap stories with other veterans.

Among the “huge amount” of cards and letters given to him on the return flight were packets from students of Costa Catholic Academy, Immaculate Heart of Mary CCD students, and parishioners.

“I was very touched by that and the messages thanking me for my service,” he said.

While exhausted when interviewed with the Easter Triduum liturgies still ahead of him, it was Msgr. Pizzamiglio who was giving thanks.

“I am very deeply grateful for those who put this Honor Flight on,” he said, “and for anybody who had anything to do with this.” He gave special thanks to his nurse-guardian, calling Morgan — who he did not know prior to the flight — “a sweetheart” who also assisted another veteran in the group.

Msgr. Pizzamiglio said he would “highly recommend” the Honor Flight Program to any veteran. For more information on participating in or donating toward Honor Flights, visit honorflight.org or call (937) 521-2400.