Being Catholic ‘defines me,’ says U of I junior entering church 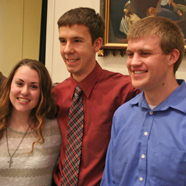 Photo Caption: Ryan Ochs (far right) poses with his sponsor, Vince Felicetti, and Kristen Goetzka. He is one of eight people who will be baptized at St. John’s Chapel in Champaign at the Easter Vigil.

CHAMPAIGN — As a junior at the University of Illinois, Ryan Ochs is still asking questions and seeking answers about where he’s going and what his future will look like. One thing he is absolutely sure of, however, is that he will be coming into the Catholic Church at the Easter Vigil next Saturday.

“At this point in my life, to be Catholic is who I am,” he told The Catholic Post. “It defines me.”

Ochs is one of eight catechumens who are preparing for baptism through the RCIA process at St. John’s Catholic Newman Center here. Another 14 people will be received into the full communion of the Catholic Church during the celebration in St. John’s Chapel.

It’s been a grace-filled year for Ochs, who counts last year’s Easter Vigil as his first Mass.

While his family has Catholic roots, he didn’t have a strong faith background growing up in Schaumberg — even though St. Marcelline Church was “pretty much in my backyard.” When he was 10, his grandmother introduced him to Catholicism.

“The whole thing intrigued me — especially the Eucharist,” Ochs said. “Maturing and coming to understand and falling in love with the Lord in the Eucharist is something I’ve been doing over the years.”

He came to the University of Illinois to study physics and once he felt settled into his new life, Ochs found himself praying a little more. During a particularly trying time in his sophomore year he started to wonder why he was there and what he should be doing. He decided to turn it over to God.

“Tell me what to do and I will do it,” he prayed. “Within a few weeks I felt his presence in my life and the call to come to the church.”

He approached Shawn Reeves, director of religious education at the Newman Center, and got involved in the Rite of Christian Initiation of Adults. Paired with Vince Filicetti, a 2013 graduate of the University of Illinois, he started praying and going to Mass more often.

HUNGER FOR THE EUCHARIST
Ochs also changed majors, trading physics for philosophy. Insisting that the two have more in common than people give them credit for in terms of seeking answers, he acknowledged that it conforms to his interest in the priesthood.

Sister Theresa Samson, FMA, who is part of the campus ministry team at St. John’s Catholic Newman Center and assists with the RCIA process, has been instrumental in offering spiritual guidance and furthering his vocational discernment, he said.

“I am deeply thankful to God for her presence in my life,” Ochs shared. “She has helped me grow significantly in my personal relationship with Jesus Christ.”

Open to priesthood, married life and single life, he is keeping his eyes fixed on Easter for now.

“I find that Mass centers my prayer life and all my other forms of prayer and time spent in prayer flow from the celebration of holy Mass, especially my time spent with Our Lord in eucharistic adoration,” he said, adding that the rosary and praying the liturgy of the hours provides much-needed nourishment for the spiritual quest he is on.

Ochs looks forward to taking the next step by receiving the Eucharist for the first time.

He will be surrounded by his family when he does, including his grandmother, Joyce Ochs from Ohio, who set him on the path in the first place.