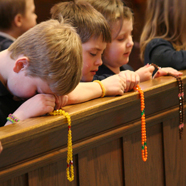 PONTIAC — Praying the rosary is nothing new for students of St. Mary School here, who discovered the power of this devotion when a classmate became ill several years ago. Since then the fifth-graders have led the rosary before the 9:30 a.m. Mass each Friday.

What changed on the first Friday of March is that the children were consecrated to the Sacred Heart of Jesus and the Immaculate Heart of Mary and then prayed together as the first Illinois group in a lay movement known as the Children’s Rosary. Every first Friday from now on they will join their counterparts around the world in praying for the pope in a special way and each other.

Founded in 2011 by Blythe Kaufman of Hartford, Conn., the movement seeks to foster rosary prayer groups composed of children and led by children. Each Children’s Rosary concludes with an Our Father, Hail Mary and Glory Be for the Holy Father.

“I believe their prayers are very powerful, first of all, and their prayers are sincere,” said Shari Paris, a member of St. Mary Parish who brought the idea of the Children’s Rosary to Father David Sabel, pastor.

“The future is going to be in their hands,” she told The Catholic Post. “If they can learn now to practice prayer on a regular basis in a meaningful way, think of how much it will help them through life, how it will help them grow not only spiritually but ethically and morally.”

BUILDING THE CHURCH
Offering words of thanks at the rosary and Mass on March 7 was fifth grade teacher Jorj Ann Casson. She explained to the current students what it was like to have her son, Kevin, in class and how difficult it became to continue teaching when he was diagnosed with cancer and they searched for cures.

Linda Lambert, a friend and teacher, told her, “I will take your class. Give me your lesson plans.”

There was to be no cure for Kevin, who died in April of 2000. On his grave marker, which is shaped like a basketball, there is a rosary in honor of his classmates and all the students since who have continued the tradition, she said.

She encouraged the students to “keep that prayer power going at St. Mary’s” and then offered a rose to Lambert, who came back for the rosary and Mass. As they shared a hug the students clapped for them both.

“The kids did a beautiful job. I’m very proud of them,” Father Sabel told The Post after Mass. He said all of the students might not grasp all of the concepts in the prayers of the rosary yet, but they know they’re praying to God and the Blessed Mother.

“It’s the simple faith that Jesus calls us all to,” he said. “I’m hoping they bring it home to their families and we continue to build the church, not just within these walls, but within the family walls.”