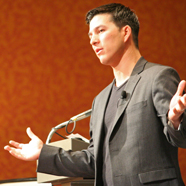 Photo Caption: Former FOCUS missionary Jeremy Rivera became the first male keynote speaker in the history of Behold conferences, and also addressed a group of men the night before.

EAST PEORIA — When Jeremy Rivera speaks about the need to admit that we are broken and be open about the pain in our lives so that God can heal us and others through us, he speaks from experience.

The first male keynote speaker at a Behold conference, Rivera also shared his story with men in the Peoria area the night before the March 1 gathering for women. Both groups heard about his Catholic upbringing, how he left the Catholic Church after leaving home to attend college, his years ministering with Protestant churches in Hawaii, California and Colorado and his eventual return to the Catholic Church through the steadfast love and support of Archbishop Charles Chaput, then the spiritual leader of the Archdiocese of Denver.

Rivera also shared the scars left by his parents’ divorce when he was still young, his troubled relationships with his father and mother, and the abortion that brought him to his knees when he found out a girl he was seeing had become pregnant during his freshman year at the University of Colorado Boulder.

“I had had enough Catholic upbringing to know that what had happened was wrong,” he said during the men’s session at the Embassy Suites Conference Center on Feb. 28. “I remember crying out to God.”

But God “writes straight with crooked lines,” Rivera said. After coming back to the church with the help of Archbishop Chaput, now Cardinal Chaput of Philadelphia, he would return to the University of Colorado Boulder as a missionary with the Fellowship of Catholic University Students and pray at every place on campus that had caused him or others pain.

Rivera went on to work as the national marketing director of FOCUS for eight years, leading a team of missionaries in proclaiming the Gospel through various forms of new media. He is now vice president of creative at PointAcross Inc. in Denver.

He told the men to remember that their gift is to protect — emotionally, spiritually, mentally and physically. But he cautioned them against buying into the American notion that providing for a family means money only.

Rivera urged both groups to fight apathy and be alert, aware and engaged in their faith and families — not trying to separate their church lives from the rest of life but to integrate them, because “God cares about your whole life.”

Rose Marie Rudolph, executive director of Behold 2014 and Behold Catholic Women’s Ministries, said each of the conference’s keynote speakers brought something different to the table this year and were able to reach different people for that reason.

“Some people were really hurting and needed to hear what Jeremy said,” she told The Catholic Post. “When you share that pain, share that journey, people feel that they can relate and belong somehow, belong in the church, and that the church welcomes broken people.”

She said his journey provided an invitation for the women to come to the church and embrace their femininity and the truth of the church.