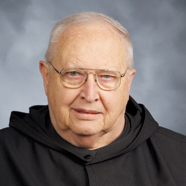 PERU — A funeral Mass was celebrated at St. Bede Abbey here on March 11 for Father Arthur Schmit, OSB, longtime teacher of modern languages at St. Bede Academy and also a beekeeper who directed the abbey’s apiary.

Father Arthur, 83, died the morning of March 8, 2014, in St. Joseph Nursing Home, Lacon. He had been a patient since Jan. 10, when his congestive heart failure and related complications began to require hospice care.

Abbot Philip Davey, OSB, of St. Bede Abbey was principal celebrant of the funeral Mass. Burial was in the abbey cemetery.

Father Arthur was born Sept. 23, 1930, in Port Washington, Wis., to Gustave and Gertrude (Dunst) Schmit. During his early childhood the family moved to Peoria. He attended the former St. Boniface School and Spalding Institute in Peoria, graduating in 1948. He then came to the junior college seminary at St. Bede, earned an associate degree two years later, and was accepted for admission to the Benedictine community at St. Bede Abbey with eight other candidates — the largest class the community has ever had.

After his novitiate year at St. Bede, he made simple profession of vows on July 11, 1951. He spent two years at St. John’s University, Collegeville, Minn., in order to complete his college studies, and received a bachelor of arts degree in philosophy in 1953.

For the next four years he studied theology in preparation for the priesthood at the St. Bede School of Theology. He was ordained by Bishop William Cousins at St. Mary’s Cathedral, Peoria, on June 2, 1957.

After teaching in the academy and serving as prefect of boarding students in the minor seminary, Father Arthur was assigned to graduate studies, first in modern languages at Georgetown University in Washington, D.C., and then in educational administration at the Catholic University of America, obtaining a master’s degree in each of these areas. He returned to the abbey and served as chief executive officer (rector) of St. Bede Junior College and Academy from 1963 to 1970.

He continued to teach modern languages until his retirement from teaching in 2011, and was the sole teacher of French to successive generations of students. He also taught German as needed. To maintain his language skills he did further study at the universities of Dijon, Salzburg and Strasbourg during the summers of 1971, 1972 and 1980, respectively.

Father Arthur also served the academy as moderator of the student government from its inception until 2007, in which capacity he organized many student trips to participate in conventions, to help the poor in Appalachia, and for skiing, as well as numerous educational excursions to Europe for both students and adults. He was moderator of the men’s club of the academy until his admission to the nursing home in January.

Father Arthur had also become knowledgeable about beekeeping and served as the decades-long director of St. Bede’s apiary, annually providing honey for the monastic community and some for sale, though he eventually needed help with the physical labor.

In the 1970s, he had served on the Peoria diocesan board of conciliation and arbitration.

In addition to the monastic community of St. Bede, Father Arthur is survived by his sister, Rosalie Cavanaugh of Monmouth, and her husband James.

One brother, Jerome, and a sister, Perrine, preceded him in death.