Chicago’s Cardinal George to undergo new round of chemotherapy 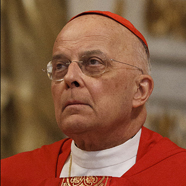 Photo Caption: Cardinal George intends to maintain his administrative and public schedule during this current round of chemotherapy, although it may occasionally be reduced because of lowered immunity.

CHICAGO (CNS) — Chicago Cardinal Francis E. George is preparing to undergo a new round of chemotherapy to address “current signs of activity of cancer cells surrounding his right kidney,” according to a March 7 announcement by the Chicago Archdiocese.

The cardinal has met with his medical team, which recommended the course of treatment based on the results of several recent tests.

Cardinal George, 77, was diagnosed with urothelial cancer in August 2012 and underwent chemotherapy at that time. The cancer, dormant for well over a year, is still confined to the area of his right kidney.

“After extensive testing, scans, biopsies and diagnosis, it was agreed that the best course of action is for the cardinal to enter into a regimen of chemotherapy, with drugs more aggressive than those used in the first round but for a more limited duration initially,” the archdiocese said.

Cardinal George intends to maintain his administrative and public schedule during this current round of chemotherapy, although it may occasionally be reduced because of lowered immunity.

In a column titled “Lent: Taking stock of our lives,” in the Catholic New World, the archdiocesan newspaper, the cardinal addressed his health and the cancer treatment ahead.

“If I may speak personally, this Lent finds me once again in poor health. My cancer, which was dormant for well over a year, is still confined to the area of the right kidney, but it is beginning to show signs of new activity,” he said. “After many tests, scans, biopsies and other inconveniences, the settled judgment is that the best course of action is to enter into a regimen of chemotherapy, with drugs more aggressive than those that were used in the first round of chemo.”

Cardinal George said he will receive the treatments over the next two months and his doctors will evaluate his reaction to the chemo.

“I was able to maintain my administrative schedule well during that first round, although my public schedule was sometimes curtailed because of lowered immunity,” he wrote in the column. “As I prepare for this next round of chemo, I ask for your prayers, which have always sustained me, and for your understanding if I cannot always fulfill the schedule already set for the next several months.”

He said he is not currently experience any symptoms of his cancer, but acknowledged “this is a difficult form of the disease.”

“It will most probably eventually be the cause of my death,” he explained. “Chemo is designed to shrink the tumor, prevent symptoms and prolong life.”

In 2006, surgeons at Loyola University Medical Center removed his bladder, prostate gland and sections of his ureters — the tubes that carry urine from the kidneys to the bladder — to rid his body of cancer found there.

The cardinal has often said that one of his goals is to live to see retirement since all of the other Chicago bishops died in office. His predecessor, Cardinal Joseph Bernardin, died in 1996 at age 68 of pancreatic cancer.

A five-month bout with polio when Cardinal George was 13 damaged both of his legs, forcing him to use a brace on his right leg. He walks with a pronounced limp.

He served as president of the U.S. Conference of Catholic Bishops from 2007 to 2010.

Appointed to head the Archdiocese of Chicago in 1997, he was made a cardinal in 1998. Before that, he was archbishop of Portland, Ore., and bishop of Yakima, Wash.