CRS commits $20 million to typhoon relief in the Philippines 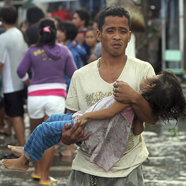 Photo Caption: A father carries the lifeless body of his daughter Nov. 10 on the way to the morgue after Super Typhoon Haiyan hit Tacloban, Philippines. The typhoon is believed to have killed tens of thousands.

BALTIMORE (CNS) — Catholic Relief Services officials committed $20 million in emergency aid for survivors of Super Typhoon Haiyan, expecting that the funds will come from a second collection the agency asked U.S. bishops to take in their dioceses before the end of the year.

“Our goal is to serve 100K families, about a half million people,” CRS president Carolyn Woo, told the U.S. Conference of Catholic Bishops Nov. 11, the first day of their annual fall general assembly in Baltimore.

The bishops’ international relief and development agency was assembling assessment teams Nov. 11 to head into the disaster zone. Woo said the teams must be completely self-sufficient because little remains in the worst hit communities.

“They must be able to live in the field without any support,” she explained.

Bishop Gerald F. Kicanas of Tucson, Ariz., chairman of the CRS board, said the collection could be taken in diocese the weekends of Nov. 16-17 or Nov. 30-Dec. 1.

CRS staff in the Philippines was rushing to restock emergency supplies in the wake of the storm, Woo said. The agency’s normally well-stocked warehouses were depleted of materials because of a widespread distribution of supplies after a magnitude 7.1 earthquake shook the central Philippines Oct. 15.

The typhoon struck some of the same areas affected by the earthquake.

CRS teams were hoping to gather 18,000 tarps for shelters, hygiene kits and water and sanitation supplies. The agency also planned to institute cash for work programs to provide income for people as they undertake debris removal, Woo said.

Bishop Kicanas noted that it is expected that some of the funds will be set aside for the reconstruction of Catholic churches, schools and agencies, but that the immediate need for relief services will take precedence in the short term.

He said dioceses, parishes and individuals can designate that their donations for typhoon relief be used only for humanitarian purposes and not for rebuilding church structures.