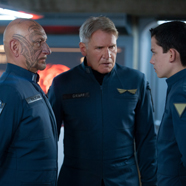 The following movie reviews are supplied by Catholic News Service in conjunction with the United States Conference of Catholic Bishops’ Office of Film and Broadcasting.

For full reviews of these films, as well as earlier releases, visit the CNS movie site here.

This list will be updated regularly, and all reviews are copyright (c) 2013 Catholic News Service/U.S. Conference of Catholic Bishops.

Raucous sequel, blending comedy and drama, in which a group of college friends reunite for a Christmas house party, only to find old problems and rivalries bubbling back up to the surface.
One conflict divides a football star (Morris Chestnut) from his erstwhile closest pal (Taye Diggs) based on the latter’s long-ago premarital dalliance with the gridiron great’s now-happily married wife (Monica Calhoun). Another arises when a respected charter-school principal (Harold Perrineau) discovers that a vintage sex video making the rounds on the Internet shows his spouse (Regina Hall), an ex-stripper who now raises funds for his academy, prostituting herself at a fraternity party. Things turn serious with the revelation that one of the central figures is seriously ill.
Though religion is unusually prominent in writer-director Malcolm D. Lee’s follow-up to his 1999 feature “The Best Man,” raunchy jokes are even more so. Pornographic images involving upper female nudity and debased behavior, brief graphic marital lovemaking, excessive sexual humor, drug use, mature themes, including prostitution and promiscuity, about a half-dozen uses of profanity, much rough and crude language.

This romantic comedy, written and directed by Richard Curtis, is a wish-fulfillment fantasy about changing your destiny at will, to win the love of your life.
On his 21st birthday, a young man (Domhnall Gleeson) is given a rather unusual present by his father (Bill Nighy): the knowledge that the men in the family can travel back in time. He uses this special gift to land a girlfriend (Rachel McAdams), marry, and have a happy, perfect life. Unlike 1993’s “Groundhog Day,” where the hero betters himself as well as the world around him, “About Time” takes a more narrow view. The manipulation of others for selfish reasons, coupled with disrespect for the role of divine providence in one’s life, may leave the viewer feeling empty rather than satisfied.
Implied premarital sexual activity, brief nudity, several vulgar gestures, some sacrilegious humor and sexual innuendo, much profanity and crude language.

Wielding his mighty hammer, the “God of Thunder” returns with a vengeance in this rousing 3-D adventure, based on the popular Marvel Comics series and directed by Alan Taylor.
This sequel to 2011’s “Thor” and 2012’s “The Avengers” finds our titular superhero (Chris Hemsworth) returning to Asgard, his home world, where his wayward brother (Tom Hiddleston) stands trial for war crimes. Back on Earth, Thor’s erstwhile girlfriend (Natalie Portman) gets sucked into a vortex to the Dark World of the film’s title, unleashing a chain of events that leads to battle.
“Thor: The Dark World” assumes operatic proportions as it barrels towards a smash-bang conclusion that lays waste to multiple worlds, not to mention some lovely Georgian architecture in London.
Parents should note that the violence is extreme at times and not for little ones. Intense but bloodless combat scenes, some scary sequences, and a few mild oaths.

Enlightened and well-wrought science-fiction movie, based on the prescient 1985 book of the same name, about a 12-year-old (Asa Butterfield) chosen to lead Earth’s military forces against an alien race that 50 years earlier tried to colonize the planet, resulting in the deaths of millions.
Mentored by a bellicose colonel (Harrison Ford) and the hero of the first invasion (Ben Kingsley), the boy possesses both compassion and strong tactical skills. Director and screenwriter Gavin Hood highlights a salubrious message about the moral pitfalls of war and deploys elegant special effects to dramatize the virtual nature of how it is conducted in the near future.
Scenes of fighting and bullying behavior among teenagers, several classroom slurs, some scary imagery, some mild innuendo, one use of crass language.

Two rogue turkeys travel back in time to change the “main course” of American history in this 3-D animated comedy, directed and co-written by Jimmy Hayward.
The president of the United States (voice of Hayward) pardons a Thanksgiving turkey (voice of Owen Wilson), who enjoys a luxurious life at Camp David until a fellow bird (voice of Woody Harrelson) drafts him for a mission of the “Turkey Freedom Front.” They hijack a time machine and travel back to the first Thanksgiving in 1621 with one goal: Keep turkey off the dinner menu.
There’s something for every age in this holiday-themed package, including cute-as-a-button characters, clever humor, a sendup of science fiction, a little (superficial) slice of American history, and a good message about looking out for each other. A few mildly perilous situations, some rude humor.

The Catholic News Service classification is A-III — adults. The Motion Picture Association of America rating, PG-13 — parents strongly cautioned. Some material may be inappropriate for children under 13.

Less sexuality-soaked and blasphemous than 2010’s “Machete” — but just as gory — this action sequel is too much a deadening exercise in creative butchery, foul language and general vulgarity to make it worth viewing.
Director Robert Rodriguez, working from a script by Kyle Ward, has created a winking homage to 1970s exploitation films in the deadpan persona of the main character (Danny Trejo). He’s a scruffy Mexican superhero who — under orders from the Yankee president (Charlie Sheen, here billed as Carlos Estevez) — has 24 hours to stop a missile aimed at the United States, presumably by a drug cartel.
Though his better jabs take on American racism, immigration disputes, corrupt industrialists and the immense wall built to seal the border of Texas, he’s also inclined to solve most conflicts with the aid of outsized cutlery. Additionally, Rodriguez bogs down the first two-thirds of the picture under a fusillade of cursing and a seamy subplot involving a brothel with a strangely vicious madam (Sofia Vergara).
Nearly nonstop violence with pervasive gore, vigilante justice, implied premarital sex, a few profanities, excessive crude and crass language.

Engrossing, complex and compassionate docudrama about the skipper (Tom Hanks) of a giant container ship who is taken hostage by Somali pirates off the horn of Africa in 2009.
Director Paul Greengrass, a master of the format, skillfully re-creates the harrowing maritime ordeal while keeping the humanity of all those concerned in the foreground. Exhibiting a rare combination of empathy and technical virtuosity (save for obtrusive music), the movie highlights numerous moral dilemmas without passing conclusive judgment on any of them. Hank’s nuanced performance is given a fascinating counterweight by the memorable turn of Barkhad Abdi as the lead pirate.
Because its fair and empathetic treatment provides a model for processing the events depicted, the film is probably suitable for older teens. Numerous menacing sequences, several violent episodes with nongraphic bloody images, substance abuse, two instances of profanity, three uses of crass language.

This thrilling lost-in-space adventure — directed by Alfonso Cuaron, who co-wrote the screenplay with his son Jonas — offers up dazzling 3-D cinematography and top-notch performances. High above Earth, a Russian missile launched against a spy satellite causes a chain reaction, destroying the Space Shuttle and marooning its only surviving crewmates (Sandra Bullock and George Clooney).
What ensues is “E.T.” in reverse, as our plucky humans — who were at work repairing the Hubble Space Telescope when disaster struck — search for a way to go home.
Amid the mayhem, the film has another, deeper story to tell, as the nearness of death provokes reflections on mortality and the afterlife. These meditations are used as stepping stones toward a resolution that viewers of faith will find both satisfying and refreshingly pro-life.
Possibly acceptable for mature adolescents. Scenes of intense peril and horror, brief gore, at least one use of profanity, a few crude expressions.