New Family Resources Center to be blessed by bishop Oct. 23 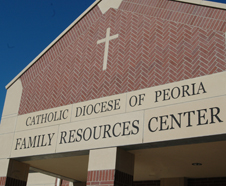 On a night when optimism and hope were recurring themes, wonderful news was announced at the annual Respect Life Dinner in Peoria before keynote speaker David Andrusko reached the microphone.

In a report on the work of the Family Resources Center, the pro-life outreach in downtown Peoria supported by the dinner, Pete Smith announced that the dedication date for the center’s newly built home has been set.

Bishop Daniel R. Jenky, CSC, will dedicate and bless the 14,000-square-foot facility — located at 415 N.E. Monroe St. across the street from the Spalding Pastoral Center — at 10 a.m. on Wednesday, Oct. 23. The public is invited.

“You will be very impressed by the beautiful building that will continue the work of the Family Resources Center,” said Pete Smith, the husband of the center’s founder and longtime director Jan Smith.

Moments later, Andrusko — editor of the National Right to Life News — enthusiastically agreed, calling his tour of the new facility earlier in the day “the high point” of his return trip to Peoria. Andrusko also spoke at the 1994 dinner.

“My hat is off to Jan and Pete Smith and all the other volunteers who make the Family Resources Center hum,” Andrusko told the more than 150 attending the dinner. Pointing out the 30,000 free-loan videos and DVDs the center offers as well as thousands of books and educational materials including fetal models, Andrusko called the center “a wonderful example of how the right-to-life movement is a movement of education and love.”

Andrusko then spent the next 40 minutes listing dozens of additional reasons that pro-lifers — locally and around the nation — should be optimistic as they work to build a culture of life.

YOUTH INVOLVEMENT, OTHER GOOD SIGNS
While Andrusko is a pro-life veteran, editing National Right to Life News for 32 years and transitioning the newspaper into the digital age at nationalrighttolifenews.org, his primary reason for hope is “the enormous influx of young people into the pro-life movement in North America.” The youthfulness of the movement is most evident at the national March for Life, which grows every year. Andrusko also noted that he was introduced at Sunday’s dinner at the Cater Inn Banquet Center by three members of the Peoria Notre Dame High School Teens for Life organization — co-presidents Alexa Massey and Nick Root as well as special events coordinator Lauren Schuler — who represent 150 classmates.

— the emergence of social media and other creative methods “to overcome the advantage the abortion advocates have because the mainstream media loves them so.”

— the importance of last spring’s trial of Philadelphia abortionist Kermit Gosnell, which “opened people’s eyes to to truths they would rather avoid. There is a lot going on in abortion clinics that is repulsive to the vast majority of Americans,” said Andrusko, and

— a broadening of the pro-life coalition, including many post-abortive women.

He described every step forward in the movement as a “corrective lens” allowing people to better see the humanity of the unborn child.

“The clearer we see him or her, the harder it is to rationalize what abortion does to him,” said Andrusko.

Also speaking at the dinner were Peoria Mayor Jim Ardis, who in welcoming remarks called the event “an important night for our community to understand the priority we place on all life,” and Father Bill Miller, IC, head of the Diocese of Peoria’s Respect Life Board. Opening and closing prayers were led by Deacon Fred Kruse and Deacon Bill Read.

Updates were also given on local Life Chain and 40 Days for Life activities. The master of ceremonies was Charles Owens.