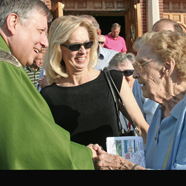 Photo Caption: Father Larry Snyder is wished well by Diane Sheley, his aunt, after an Aug. 17 Mass at Holy Family Church in Lincoln in honor of the 25th anniversary of his ordination. Looking on is Lucille Eckert.

LINCOLN — Meeting with officials at the White House to discuss the impact of government policies on the nation’s poorest and most vulnerable citizens, Father Larry Snyder is known as the president of Catholic Charities USA.

When he comes home to central Illinois, however, he is simply Father Larry — brother, neighbor, classmate and friend. They filled Holy Family Church on Aug. 17 for a Mass of Thanksgiving to mark the 25th anniversary of the Lincoln native’s ordination and continued the celebration at an open house at the Knights of Columbus Hall.

Father Snyder graduated from Carroll Catholic School 49 years ago and said that by admitting it he had probably given away the age of his classmates present.

“I apologize if that was a secret,” he said with a smile. The laughter and applause that followed indicated that no one was likely to hold a grudge.

ALWAYS THERE
The idea of being a priest was something he had in mind “as long as I can remember, since I first started going to church as a youngster,” Father Snyder told The Catholic Post earlier in the day. He cited Msgr. Leo Henkel, longtime pastor of St. Mary Parish — which merged with the former St. Patrick Parish to form Holy Family in 1977 — as a major influence.

“It was the compassion that he always showed,” said Father Snyder, the son of Dorothy and Donald Snyder. “He was a perfect model of compassion and pastoral care and sensitivity.”

After graduating from Carroll Catholic in 1964, he went to St. Bede Academy in Peru and eventually entered the Benedictine community. During his time there he taught at his alma mater.

“After six years you take solemn vows or lifelong vows and at that point, as much as I loved the Benedictines, I wasn’t ready to make that kind of commitment,” he explained.

Father Snyder earned a bachelor’s degree in music with a minor in German from Illinois Benedictine University in 1974. He went on to teach at Marquette High School in Ottawa for four years and served as liturgist and choir director at St. Columba Church.

Father Tom Kelly, pastor at St. Columba, was another major influence as he discerned his priestly vocation.

“With Father Kelly, it was more the vision of what a parish and the church are called to be,” Father Snyder said. “It was after Vatican II, so there was the whole implementing of the RCIA and the whole model of parish life moving in that direction of adult engagement.”

He moved to Minnesota in 1983 to serve as a pastoral musician in New Hope and decided it was time to see if he was really called to the priesthood. He entered St. Paul Seminary in St. Paul, receiving a master’s degree of divinity in 1987 and a master’s degree in theology in 1988.

Father Snyder was ordained a priest for the Archdiocese of St. Paul-Minneapolis on May 28, 1988, by Archbishop John R. Roach. The prelate would set him on the road to his current ministry two years later by asking him to work with Catholic Charities in the Twin Cities.

ON THE FRONT LINES
What impressed him about Catholic Charities is that it seemed to be where the church was “on the front lines” and fighting to help people who are facing a wide range of challenges, especially poverty.

He worked at Catholic Charities in the Twin Cities for 15 years, first as the assistant to Msgr. J. Jerome Boxleitner. Father Snyder succeeded him as executive director in 1998.

“Some of the (government) policies are presenting real challenges for us to be able to continue the work we have been doing for a very long time,” he said of the local situation and what’s happening around the country. “We have to keep struggling, especially in places where we continue to do adoption and foster care work, to have everything in place that we need.”

Catholic Charities of the Diocese of Peoria was reconfigured after legislation recognizing same-sex unions in Illinois forced the agency to cease foster care and adoption services. Today the diocesan agency accepts no state funding, operating solely through donations.

Getting the story out about the work done by Catholic Charities and the charitable organizations serving alongside them, as well as the impact of that work, is vital, according to Father Snyder.

He takes heart from the example of Pope Francis, saying he is amazed and inspired by what the pontiff has done in a short time. Catholics have told him the pope is responsible for pulling them back into the church, while Protestants have said he’s having an influence on their churches, too.

“I think his impact will be much greater than our church,” Father Snyder said, adding there’s no one who won’t be touched in some way by Francis’ message.

“We’re all going to be challenged. That’s a good thing,” he said. “The Gospel does challenge us. We need that.”

Father Snyder said he is humbled by the goodness of people and feels privileged to see their faith in action as he travels around the country.

“So many lives have been changed because of what we do in living out our faith. That’s what keeps me going,” he told The Post.

“Catholic Charities served 10 million people last year. Every one of those people has a story . . . of God’s love and compassion breaking into their lives,” he said. “I’ve got the best job in the world because that’s what I get to witness each and every day.”