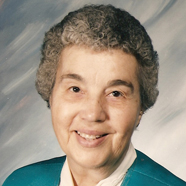 Photo Caption: Sister Benita was a native of Galesburg who served in Moline, Nauvoo, Ivesdale, Atkinson, Monmouth, LaSalle, Bradford, Wenona and Peoria in the Diocese of Peoria.

ROCK ISLAND — A Mass of Christian Burial was celebrated on Aug. 23 in the chapel of St. Mary Monastery for Sister Benita Reavy, OSB, who taught in Catholic grade schools in central Illinois for 42 years. Burial followed in Calvary Cemetery, Rock Island.

Sister Benita died on Aug. 20, 2013, at St. Mary Monastery. She was 94.
Born on Aug. 14, 1919, in Galesburg, Sister Benita was the daughter of Frank and Anna (Klein) Reavy. She attended St. Mary Grade School and St. Mary’s Academy, both in Nauvoo, and received a bachelor’s degree in education from St. Ambrose University in Davenport, Iowa.

She entered the Benedictine community on July 26, 1939, at St. Mary Monastery, which was located in Nauvoo at that time. Sister Benita professed first vows in 1941 and made her final profession on Aug. 21, 1944.

In the Diocese of Peoria, she taught at St. Mary in Moline, St. Mary’s Academy in Nauvoo, St. Joseph in Ivesdale, St. Anthony in Atkinson, Immaculate Conception in Monmouth, St. Roch in LaSalle, St. John in Bradford, St. Mary in Wenona, and St. Boniface in Peoria. She also served in the Archdiocese of Chicago and the Diocese of Gary, Ind.

In addition, Sister Benita was involved in pastoral care in LaSalle and Monmouth, and ministered as a licensed practical nurse at St. Mary Monastery in Nauvoo.

When she celebrated seven decades of consecrated life in 2011, Sister Benita said, “I give thanks for my 70 years of serving others and being served by them on the way to the kingdom.”

Preceded in death by her parents and eight siblings, Sister Benita is survived by her nieces and extended family, and her Benedictine Sisters, with whom she shared life for 74 years.